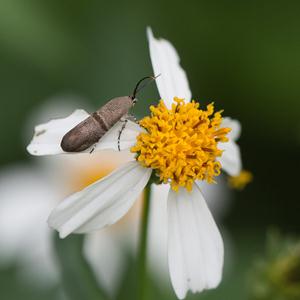 Phycodes minor (fig leaf roller moth) is a moth of family Brachodidae it was described by the Moore in 1881. This moth is found in South and Southeast Asia.Brachodidae is a family of the moth flies during the day time, they are also known as little bear moths which includes about 135 species distributed all over the world expect Nearctic region.Phycodes minor remains active from March to Sept and passed through the four larval instars. Majority of the species were described from the palaearctic region, fauna of Brachodidae in Southern Asia is most diverse.

Eggs are in white color laid on both sides of the leaf. Larvae of all instars are white in color having its head is dark brown and 1st segment after the head is black and full grown larvae is upto 17 to 19 mm. Larvae shows very quick response when open the leave. It starts jumping and showed very much quick reaction it is really tough to control it on the leaf.Larvae preferred to live in dark and seriously avoid the light. Upper side of all the body segments has black spots and minute hairs are also present. Frist three pairs of legs are black and these are true legs while four pairs of mid-abdominal legs and one pair is anal pro leg. Pupae are in dark brown color and formed inside the cocoon and measure about 14 to 15 mm. Adult moth is elephant grey in color and having dark brown or black color band at the centre of the forewing. Size of adult is about 12 to 14mm.

Phycodes passes through the four life stages Egg larvae, pupae and Adult stage (moth stage). Damaging stage is the larval stage which causessevere damage to the fig plant.Phycodes minor remained active from March to September and passed the winters in pupal stage.Females of Phycodes moth lay white eggs on the both sides of the leaves may be singly or in the form of batch of 4 – 8 eggs. One female laid eggs 3-81 during his life. Eggs hatch within 4- 6 days and white colored larvae emerged with dark brown color head. Larvae of Phycodes moth passes through the four overlapping instars. Larva of Phycodes moth Completes its life cycle within 30 to 36 days. After the Completion of larval stages it changes into pupal stage and it overwinters in pupal stage and hibernates in plant debris under the infested trees but in some time if the plant debris is not available it may also hide in the soil. After passing the winters in March Adults are emerged from the pupae adults may live for about 5-12days and after mating and egg laying both male and females die.

Damaging stage is only the larval stage it feeds on the leaves of fig very badly and makes them the skeleton. After emerging the 1st instar larvae make silken thread and combine the both sides of leaves and makes it a roll that is why it is also called as fig leaf roller. It not only feed on the leaves of the fig but it also causes damage by rolling the leaves by the help of silken threads in case of severe damage it attacks on upto 92% leaves.It indirectly causes severe loss in the yield of fruit plants.