Army ants are dominant social hunters of invertebrates and thereby play an important role in tropical ecosystems. All the species are the members of true ant family Formicidae but several ant species show a combination of certain interrelated behavioral and morphological traits. This is often referred to as “legionary behavior “and is an example of convergent evolution.

Army ants are obligate collective foragers, group predators; they are nomadic and permanently wingless queen. This combination of traits has been collectively referred to as “army ant adaptive syndrome”.

Most New world army ants belong to the subfamily Ecitoninae, which contains two tribes Cheliomyrmecini and Ecitonini.The former only contains the genus Cheliomyrmex, whereas the latter contain four genera Neivamyrmex,Nomamyemex,Labidus and Eciton. The largest genus Neiva.contains more than 130 described species. The most predominant species is Eciton burchellii and Eciton hamatum.

Old world army ants are divided between the Aenictinae and Doryliniae.Anectini contains 120 described specie in the single genus Aenictus.Dorylinae contain the genus Dorylus with 60 described species. The most renowned representatives of the Doryliniae are the “driver ants “of the subgenus Anomma which raid in massive swarms.

The taxonomy of army ants remain ever changing and genetic analysis will continue to provide more information about relatedness of the various species. 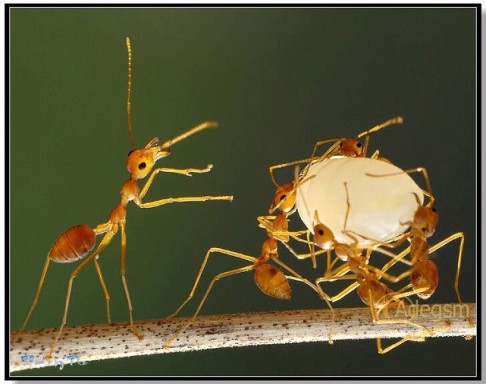 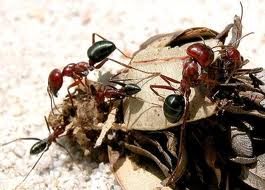 The Queen ant lays eggs, the soldier focus their attention to the defense of the colony ant, the worker ants are split between being foragers or tending to the queen brood.

Army ant has got long pointed, sickle shaped mandibles, single eyes, double segmented waist, hooks in hands and feet, long legs and a proper sting, it is gold to dark brown in color. Like a good soldier would, the army ant uses its specialized armor to protect its colony. The workers will attach themselves to each other using the hook on their hands and feet, forming a shield of ants.

Army ants communication is completely dependent on chemical messaging and trail pheromones. These methods of communication act as a stimuli for changing behavior patterns. Unlike other ants, army ants do not have compound eyes, but instead have single eyes. Army ants are also blind and have to use their antennae to sense smell and touch. The army ants use these senses to communicate in nesting and raiding.

Workers leave the nest in groups of several hundred thousand individuals in search of live prey, which if they found, kill on the spot, partition if too large to carry and transport back to the nest. Most of the species also attack the colonies of other social insects. And some are generalized predators, and overwhelm solitary prey that is considered larger than a single ant.

Different species of army ants have different raiding pattern, epigaeic (above ground) and hypogaeic (forage in the soil, largely hidden from human observer). Some species are swarm fronts attackers. A swarm front attack looks like a giant wave that sweeps into an area and over everything in its path. A raid front attack consists of small groups of ants coming from different directions and attacking. In each case, ants move back and forth along chemical trails they create as they move. Giant guard ants with huge mandibles line the trail and watch over the workers and protect them. Army ants create a temporary nest out of their own bodies. Individual ants fasten onto each other using hooks and spines on their feet and their mandibles. In this way a living nest if formed called bivouac, which is frequently relocated.  Bivouacs tend to be found in tree trunks or in burrows dug by the ant. The older female workers are located on the exterior; in the interior are the younger female workers. At the smallest disturbance, soldiers gather on the top surface of the bivouac, ready to defend the nest with powerful pincers and (in the case of the Aenictinae and Ecitoninae) stingers. The interior of the nest is filled with numerous passages and contains many chambers with food, the queen, the larvae, and the eggs.

Two types of nomadic ants have been distinguished,”phasic” and “nonphasic”species.

This group includes the New World army ants E.burchellii.E.hamatum and N.nigrescens, as well as some Asian Aenictus species. In these species, brood is produced and develops in distinct, regularly spaced, and partially overlapping cohorts. Emigrations only occur during the nomadic phase, when food demanding larvae are present. During this phase bivouacs are more exposed and colonies emigrate almost every night.

The stationary phase, which lasts about two to three weeks, begins when the larvae pupate. From this point on, the prey that was previously fed to the larvae are now fed exclusively to the queen. The queen becomes highly physiogastric and lays batch of eggs that hatch towards the end of this phase. At the end of the stationary phase, the pupae emerge from their cocoons. After this, the ants resume the nomadic phase. During nomadic phase, however, the queen is contracted and can walk in the emigration columns.

This includes Dorylus (Anomma) species, and possibly all Doryliniae.Dorylus queen do not undergo the extreme physiological cycles and the brood is therefore not strictly synchronized in their development.

Queens of epigaeic Dorylus species are the biggest ants on earth with a total body length of more than five centimeters. During their life they lay an estimated quarter of a billion eggs. To accomplish this, they store close to a billion sperm in their spermatheca. The queens of other army ants are smaller but are still highly specialized egg layers. Typically army ant colony is headed by a single queen but exception is there.

The permanent lack of wings in queen has an important corollary: they do not go for mating flight. Instead young army ant queens mate inside their natal colonies with foreign male disperse on the wing. Like the queens of other social Hymenoptera, army ant queens mate shortly after they have eclosed from the pupae.

A queen Neivamyrmex army ant.  Her enormous abdomen houses ovaries for egg production.  Queen army ants are among the most fecund of all insects, as army ant colonies may have tens or  hundreds of thousands of worker ants (such as the small ant pictured riding on top) and the reproduction is the work of a single mother queen.

Ants are the dominant insects of the world, and they have had great impact on habitat on almost all over the land surface of the world for more than 50 million years

1) Muhammad Rizwan Altaf is student of B.Sc(Hons), Department of Entomology,University of Agriculture,Faisalabad. He is also affiliated with Agrihunt as an Author.

2) Sajida Sana Waqar is student of B.Sc(Hons), Department of Entomology,University of Agriculture,Faisalabad. He is also affiliated with Agrihunt as an Author.