Genetic variations in plants that have been produced by plant tissue culture and can be detected as genetic or phenotypic traits.

Steps involved in induction and selection of Soma clonal Variations 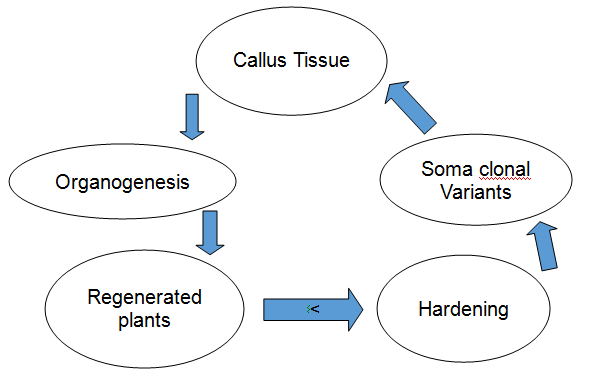 In addition to the variants/mutants (cell lines and plants) obtained as a result of the application of a selective agentin the presence or absence of a mutagen, many variants have been obtained through the tissue-culture cycle itself.These soma clonal variants, which are dependent on the natural variation in a population of cells, may be genetic orepigenetic, and are usually observed in the regenerated plantlets (Larkin & Scowcroft 1981). Somaclonal variationitself does not appear to be a simple phenomenon, and may reflect pre-existing cellular genetic differences or tissueculture-induced variability. The variation may be generated through several types of nuclear chromosomal re-arrangements and losses, geneamplification or de-amplificationj: n’on-reciprocal mitotic recombination events, transposabllelement activation, apparent point mutations, or re-activation of silent genes in multigene families, as well as alterationsin maternally inherited characteristics (Larkin et al. 1985; Scowcroft et al. 1987; Karp 1994).

Many of the changes observed in plants regenerated invitrohave potential agricultural and horticultural significance.

These include alterations in plant pigmentation, seed yield, plant vigour and size, leaf and flower morphology,essential oils, fruit solids, and disease tolerance or resistance. Such variations have been observed in many crops, includingwheat, triticale, rice, oats, maize, sugar cane, alfalfa, tobacco, tomato, potato, oilseed rape and celery (Thorpe 1990; Karp 1994). The same types of variation obtained from somatic cells and protoplasts can also be obtainedfrom gametic tissue (Evanset al. 1984; Morrison & Evans 1988). One of the major potential benefits of somaclonal variationis the creation of additional genetic variability in coadapted, agronomically useful cultivars, without the need to resort to hybridization (Scowcroft et al. 1987). This method could be valuableifselectionispossiblein vitro, orif rapid plant-screening methods are available. It is believed that somaclonalvariants can be enhancedfor some charactersduring culture in vitro, including resistance to disease pathotoxins and herbicides and tolerance to environmentalor chemical stress. However, at present few cultivars of any agronomically important crop have been produced throughthe exploitation of somaclonal variation (Karp 1994).