Last summer, I was fortunate in obtaining a clear picture of a very large Mantis. I researching the Mantis (I also have a small lightweight tiller by that name) I found that the adjectives Praying or Preying is more than a play on words. Their reproductive habits are fascinating, not terribly unlike the Black Widow Spider

The insect order Mantodea or mantises consists of approximatively 2,300 species worldwide in temperate and tropical habitats, of which a majority are in the family Mantidae. Often mistakenly spelled preying mantis (an eggcorn, since they are notoriously predatory), they are in fact named for the typical “prayer-like” stance. The word mantis derives from the Greek word mantis for prophet or fortune teller. In Europe, the name “praying mantis” refers to only a single species, Mantis religiosa. The closest relatives of mantises are the orders Isoptera (termites) and Blattodea (cockroaches), and these three groups together are sometimes ranked as an order rather than a super order. 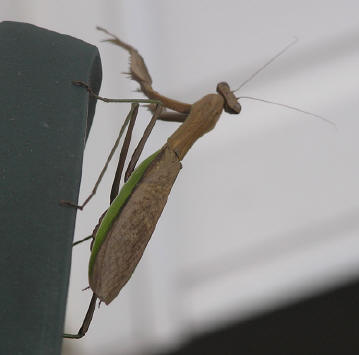 Mantises are notable for their hunting abilities. They are exclusively predatory, and their diet usually consists of living insects, including flies and aphids; larger species have been known to prey on small lizards, frogs, birds, snakes, and even rodents. Most mantises are ambush predators, waiting for prey to stray too near. The mantis then lashes out at remarkable speed. Some ground and bark species, however, pursue their prey rather quickly. Prey are caught and held securely with grasping, spiked forelegs (“raptorial legs”); the first thoracic segment, the prothorax, is commonly elongated and flexibly articulated, allowing for greater range of movement of the front limbs while the remainder of the body remains more or less immobile. The articulation of the head is also remarkably flexible, permitting nearly 300 degrees of movement in some species, allowing for a great range of vision (their compound eyes have a large binocular field of vision) without having to move the remainder of the body. As their hunting relies heavily on vision, they are primarily diurnal, but many species will fly at night, and can be commonly encountered at lights.

Mantises are masters of camouflage and most species make use of protective coloration to blend in with the foliage or substrate, both to avoid predators themselves, and to better snare their victims. Various species have adapted to not only blend with the foliage, but to mimic it, appearing as either living or withered leaves, sticks, tree bark, blades of grass, flowers, or even stones. Some species in Africa and Australia are able to turn black after a molt following a fire in the region to blend in with the fire ravaged landscape (fire melanism). While mantises can bite, they have no venom, and are not dangerous to humans. They do not appear to be chemically protected; nearly any large predatory animal will eat a mantis if it is able to detect it (mantises are generally quite aggressive towards one another, in fact, and most species are readily cannibalistic when given the opportunity).

Sexual cannibalism is common among mantises in captivity, and under some circumstances may also be observed in the field. The female may start feeding by biting off the male’s head (as with any prey), and if mating had begun, the male’s movements may become even more vigorous in its delivery of sperm. Early researchers thought that because copulatory movement is controlled by ganglion in the abdomen, not the head, removal of the male’s head was a reproductive strategy by females to enhance fertilisation while obtaining sustenance. Later, this bizarre behaviour appeared to be an artifact of intrusive laboratory observation. Whether the behaviour in the field is natural, or also the result of distractions caused by the human observer, remains controversial. Mantises are highly visual creatures, and notice any disturbance occurring in the laboratory or field such as bright lights or moving scientists. Research by Liske and Davis (1987) and others found (e.g. using video recorders in vacant rooms) that Chinese mantises that had been fed ad libitum (so were not starving) actually displayed elaborate courtship behaviour when left undisturbed. The male engages the female in courtship dance, to change her interest from feeding to mating. Courtship display has also been observed in other species, but it does not hold for all mantises.

The reason for sexual cannibalism has been the subject of some debate, with some considering submissive males to be achieving a selective advantage in their ability to produce offspring. This theory is supported by a quantifiable increase in the duration of copulation among males who are cannibalized, in some cases doubling both the duration and the chance of fertilization. This is further supported in a study where males were seen to approach hungry females with more caution, and were shown to remain mounted on hungry females for a longer time, indicating that males actively avoiding cannibalism may mate with multiple females. The act of dismounting is one of the most dangerous times for males during copulation, for it is at this time that females most frequently cannibalize their mates. This increase in mounting duration was thought to indicate that males would be more prone to wait for an opportune time to dismount from a hungry female rather than from a satiated female that would be less likely to cannibalize its mate. Some consider this to be an indication that male submissiveness does not inherently increase male reproductive success, rather that more fit males are likely to approach a female with caution and escape.

The mating season in temperate countries typically begins in autumn. To mate following courtship, the male usually leaps onto the female’s back, and clasps her thorax and wing bases with his forelegs. He then arches his abdomen to deposit and store sperm in a special chamber near the tip of the female’s abdomen.

Depending on the species, the female then lays between 10 to 400 eggs. These are typically deposited in a frothy mass that is produced by glands in the abdomen. This froth then hardens, creating a protective capsule with a further protective coat, and the egg mass is called an ootheca. Depending on the species these can be attached to a flat surface, wrapped around a plant or even deposited in the ground. In spite of the versatility and durability of the eggs, they are often preyed on, especially by several species of parasitic wasps. In a few species, the mother guards the eggs.

As in related insect groups, mantises go through three stages of metamorphosis: egg, nymph, and adult. The nymph and adult insect are structurally quite similar, except that the nymph is smaller and has no wings or functional genitalia. The nymphs are also sometimes colored differently from the adult, and the early stages are often mimics of ants. A mantis nymph increases in size (often changing its diet as it does so) by replacing its outer body covering with a sturdy, flexible exoskeleton and molting when needed. This can happen up to five to ten times, depending on the species. After the final molt most species have wings, though some species are wingless or brachypterous (“short-winged”), particularly in the female sex.

In tropical species, the natural lifespan of a mantis in the wild is about 10-12 months, but some species kept in captivity have been sustained for 14 months. In colder areas, females will die during the winter (as will any surviving males).