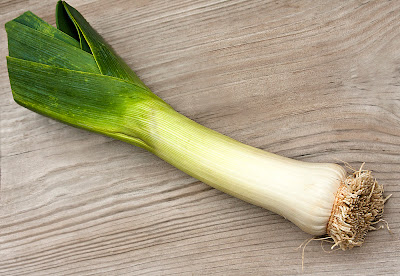 The leek is an “annual” vegetable that we may be able to make perennial.

Leeks are one of my favorite vegetables. They are kind of like a mix between an onion and garlic in flavor, a mix of onion and scallion and shallot in use, and a mix of scallion and maybe cabbage in texture. They offer a great flavor addition to many dishes, and I use them quite a bit.Leeks are biennial plants. This means that they will grow for a full season, winter over, and then flower the next season. Leeks can be harvested whenever you want them. When younger, they are more tender and can be used a bit more like a shallot. When they are older, the leaves are a bit tougher, and they can be used like large onions or almost like cabbage.I have bought leeks from the grocery store that still had a bit of the roots left on them. I chopped the lower 2-3 inches off (10-15 cm) and let it sit in a jar of water for a few days, then I planted them in the garden. Be warned that this water starts to stink very quickly. I actually do not think this step is necessary, but I have always been too busy to plant them right away. I know it will be a day or two before I will go outside and take the time (okay, it is about one minute!) to plant them, so I stick them in the water. I have left the leek “bulbs” in the water for up to a week. Within a few weeks of planting them in the soil, there are new shoots growing from the center.This is also a great way to short-cut planting leeks from seeds.My thought was that this technique could be indefinitely perpetuated. However, I have not lived in a place long enough to test this theory more than a two seasons. But then I listened to an old Permaculture course taught by Bill Mollison, the founder of Permaculture. He had a recommendation that cut out a few of my steps. When a leek is ready to be harvested, instead of pulling the whole plant out, just cut it off at ground level. Then let the plant keep on growing… just as if you harvested it and then replanted the root end.Perennial Leeks! Fantastic!If you live in an area that freezes, you can overwinter the leeks by covering them with straw or grass clippings, then in Spring just uncover the mulch. The only concern is that after overwintering, the leek may bolt sooner, but you may be able to stop it by cutting off the flower stalk before it grows too large. I need to experiment with this. I will let you know what I find. If you have done this, please let us know!