Repeated use of synthetic insecticides for mosquito control has disrupted natural biological control systems and led to resurgences in mosquito populations. It has also resulted in the development of resistance, undesirable effects on non-target organisms and fostered environmental and human health concern, which initiated a search for alternative control measures for mosquito control. Phytochemicals derived from plants have rich source of bioactive compounds such as antifeedant, oviposition deterrent, ovicidal, adulticidal, insect growth regulators, larvicidal, growth inhibitor, chemosterilant and repellent that effects the mosquito species. However, insecticides of plant origin have been extensively used on agricultural pests and to a very limited extent, against insect vectors of public health importance.

Plant based products are more favored because they have no adverse effects and no environmental pollution and they act as repellent and ovipositional deterrent against various stages and species of mosquitoes due to their excellent properties like cheap availability and environmentally safe.Azadirachtin, the extract of neem tree, is eco-friendly and non-toxic to vertebrates but have repellency against mosquitoes.It has been clearly proved that crude or partially purified plant extracts are less expensive and highly efficient for the control of mosquitoes rather than the purified compounds or extracts. It hasbeen observed that the presence of carbohydrates, acetone, chloroform, ethyl acetate, hexane, methanol, saponins, phytosterols, phenols, flavonoids and tannins in the plant extract have mosquito control activities. 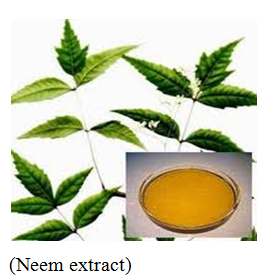