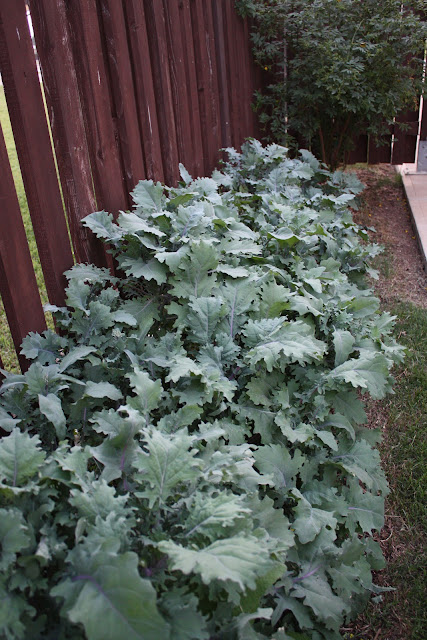 My small-scale monocrop of Kale.
I was speaking to a new friend today about my garden. He is an avid gardener himself and produces a decent amount of food for himself and his family. I was explaining to him about how in Permaculture, we truly strive to be chemical free in all of our gardening and growing efforts. He seemed shocked. I had just told him about all the plants I have grown in my rather small garden… how could I produce all that with no chemicals? I explained to him how there are many methods I use, but the two main concepts are to keep the plants as healthy as possible (which really keeps pests away) and avoiding monocropping – even on a small scale.
When gardeners plant all of one crop right next to each other (tomatoes, squash, lettuce, etc.), I call that small-scale monocropping. This give pests a prime target. The plants are hard to miss; there are so many of them. Once one plant is consumed, the pests will easily move a few inches or feet next door to the next victum. In general, pests don’t have to work hard to do a lot of damage in a short time. Avoiding planting the same types of plants next to each other makes the pests have to work a lot harder. This has kept me almost pest free for two years.
Until this year.
Quite by accident, I created a small-scale monocrop of kale. I had planted a number of portable, window-box-type planters with a wide variety of lettuces. These few planters kept us in fresh salad greens throughout the mild Turkish Winter… and that lettuce thrived. Then Spring hit, and with it came the scortching heat during the day that most people in Temperate Climates feel only in the height of Summer. That lush lettuce didn’t stand a chance.
Well, after the planters were full of bolted, flowered lettuce plants, I decided to clean out the planters. I flipped the planters on their sides, and I easily slid out the block of soil, tangled roots, and tufts of bolting lettuces. The flowers were small, but rather pretty, so I decided to just stack all the remains from the planters along the fence, right side up, and I tucked them in with some mulch. As expected, the lettuces died, but then an interesting thing happened. The Kale, which I thought was a goner as well, suddenly sprang back to life. In fact, it took off like it hadn’t ever before. I am not sure if it was the sudden room for its roots to grow now free from the planters or if the weather was now perfect for them to thrive, but thrive they did.
Now, without planning, I had a mini hedge of Kale growing along the fence.
Then about a month ago, I noticed that the Kale was covered in caterpillars. And I really mean covered. Almost every leaf had at least one, but usually three or four, caterpillars happily chewing away the leaves. My first thought was to try and figure a way to get rid of them all… pick them all off by hand (my boys love to do that), spray them off with a hose and make them work to get back to their food over and over again, or spray them with a soapy mix. I didn’t really consider using a pesticide. I don’t even own any in the first place.
But then I noticed two of the Kale plants had no caterpillars on them at all. One was right in the middle of the feeding frenzy, and one was at the end. I thought the one at the end just hadn’t been found yet, but the one in the middle… there must be something more going on here. Maybe those Kale had a different flavor to the caterpillars? Maybe they had a different compound in them that kept the caterpillars away? I still have no good explanation since all these Kale plants grew from the same seed pack.
I decided I would do nothing. I had violated one of my own rules. I had planted a small-scale monocrop. I deserved to pay the consequences. I was also interested in the Kale that no caterpillars ate. Would they be the next victims after the other plants were consumed?
As it turns out, doing nothing was a great idea. In less than a week, the caterpillars had eaten their fill. They left me with skeletons of Kale along my fence line… and two healthy Kale plants rising about them. However, within about three weeks, the beaten down Kale surged back to life. The photo at the top of this article shows the Kale patch just a few weeks after the infestation. It seems as if almost nothing happened.
I still plan to save the seed from those two Kale plants that survived the caterpillar onslaught unscathed. Maybe it was a fluke. Maybe I now have some resistant Kale plants. It will be fun to find out.
This small garden event makes me think. I wonder how much improvement in garden breeding is lost when gardeners immediately turn to chemicals to kill their pests. I wonder how many “plagues” in the garden would only result in minor set backs and quick recoveries if we didn’t intervene so quickly and so often. I wonder how much man-made chemicals would not be taken into our bodies or pollute our water if we would just wait to see how nature would handle the “problems” we see.
My accidental monocrop of Kale just reinforced my commitment to avoid any and all chemicals in my gardening.
Original Article Here