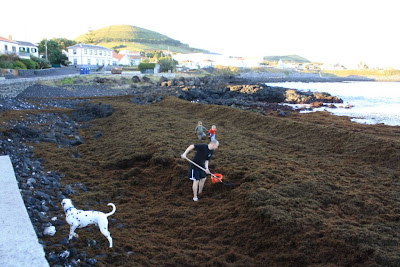 Collecting seaweed from the coast, with my boys and my dog.
I have written in previous articles about always being ready to grab what is on hand for your home vegetable garden or forest gardens. With the passing of Hurricane/Tropical Storm Nadine, one of the beaches in my neighborhood became inundated with seaweed. So I went out with my boys, dog, garden cart, bucket, and shovel in tow to the beach. I did wonder how the locals would react to me walking the streets with a large wheeled cart full of seaweed; however, I ended up meeting three groups of people who were collecting seaweed as well in just my brief twenty minute shoveling session . I think they were more surprised that a foreigner was out there with them than I was.
Seaweed is a great compost addition (I’ll talk more about that in a day or two). Everyone was gathering it for their gardens, orchards, and vineyards. One local man, in his 60’s, told me that he had never seen this much seaweed washed up at one time. The boys loved running in the feet deep seaweed. To them it was like a super-sized trampoline. The dog was acting like it was a field of brown snow. Fantastic memory. 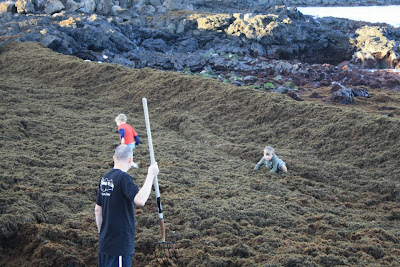 My boys playing on the bed of seaweed.