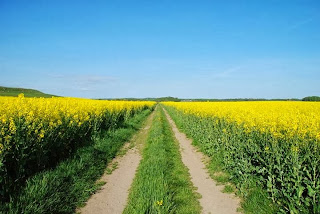 Researchers from Trinity College Dublin have shown that bees contribute almost €4 million to the Irish economy each year, simply by improving seed production in crops of oilseed rape.

Known for its brilliant yellow flowers, oilseed rape is being grown to an increasing extent in Ireland as farmers respond to a heightened demand for pure plant oil. This oil is an important source of biofuel and could ultimately reduce our reliance on non-renewable fossil fuels as we seek greener, more environmentally friendly solutions to energy demands.

The crop is pollinated adequately by the wind, but, for the first time in Ireland, researchers were able to show that foraging bees transferring pollen from flower to flower greatly boost the all-important yield. When bees were experimentally excluded from visiting the flowers, seed production was, on average, 27% lower than when they had open access.

This discovery, which will soon appear in the international Journal of Insect Conservation, added to related findings that were reported in another article in the journal GCB Bioenergy. Both papers sprang from research conducted as part of the Sectoral Impacts on Biodiversity and Ecosystem Services (SIMBIOSYS) initiative, which received €1.6 million in funding from the Environmental Protection Agency over a five-year period.

In addition to the discovery that bees are important assets to oilseed rape farmers, the previous paper showed that these fields were buzzing with insect life comprising many species of bees, hoverflies and beetles.

Associate Professor in Botany at Trinity, and Director of the Trinity Centre for Biodiversity Research, Jane Stout, who was the principal investigator on both papers said: “Oilseed rape fields are full of pollinators, including honeybees, bumblebees, solitary bees and hoverflies. Although many people think of the honeybee as being our main pollinating species, bumblebees and hoverflies are also important pollinators of oilseed rape crops. We found hundreds of bees, especially in spring oilseed rape, where we estimated on average 600-800 colonies of bumblebees alone using the pollen and nectar from just one field.”

The diversity and sheer volume of pollinators in oilseed rape crops came as something of a happy surprise, because some reports had previously suggested that swathes of the plant might discourage farm-friendly insects. However, researchers caution that different patterns could arise when the crop is grown on a larger scale than was investigated. They also recommend interspersing fields that grow food and biofuel crops in the hope that such a patchwork quilt-like pattern will promote insect diversity and enhance the precious pollination service provided by the critters.

Researcher Dara Stanley, who worked with Stout on these projects, added: “Oilseed rape crops in Ireland are expanding hugely, and, if they benefit from pollination, this is both good news for farmers, and an incentive to conserve bees in agricultural areas.”

One major threat to bees comes from the use of certain pesticides called neo-nicotinoids, which have been implicated in recent declines of many species throughout Europe and North America. An EU ban preventing the use of these pesticides on oilseed rape was recently agreed, which will hopefully help the bees of Ireland keep up their good work in our farmers’ fields. However, there are concerns that use on other crops, which is still permitted, will negatively affect our furry friends.