Weeds hold an enigmatic and sometimes controversial place in agriculture, where they are generally reviled, reluctantly tolerated, and occasionally admired. Weeds affect crop productivity and quality, and ultimately the sustainability of agriculture. This makes them an important object of scientific study. Allelopathy is a mechanism of plant interference mediated by the addition of plant-produced secondary metabolites to the rhizosphere. Allelochemicals are present in all types of plants and tissues and are released into the soil rhizosphere by a variety of mechanisms, including decomposition of residues, volatilization and root exudation. Allelochemical structures and modes of action are diverse. Research has focused on development of weed management strategies using allelopathic crop residues, intercropping of allelopathic crops, mechanism of allelochemical action, and gene regulation of allelochemical production. Utilization of allelopathy as cover crops, rotational crops, mulches and foliar application of aqueous extract of allelopathic plant material for weed management in field crops are a thrust of this laboratory.

METHODOLOGY FOR PREPARATION OF EXTRACTS

The plant material harvested at maturity were dried, chaffed with fodder cutter into small pieces and stored under shade. This chaffed herbage was soaked for 24 hours in a ratio of 1:10 (w/v) and extract was taken with the help of sieve. These extracts were concentrated up to 20 times by boiling for easy handling and application. The concentrated plant water extracts alone (18-21 Lha-1) and in combination with reduced doses of different herbicides were used as post-emergence spray for weed control in different cereal crops. Sorghum, sunflower and brassica are potential allelopathic crops which are used for preparation of extracts.

1.     Sorghum + sunflower + brassica + mulberry water extract mixture each @ 18 and 21 L ha-1 was tank mixed with half  and one fourth dose of the standard herbicide (Primextra Gold 720 SC), applied as early post-emergence showed 91-94  and 82-85% inhibition in total weed dry weight at 20 and 40 days after sowing, respectively.

SELECTED SNAPS OF MAIZE AND WHEAT 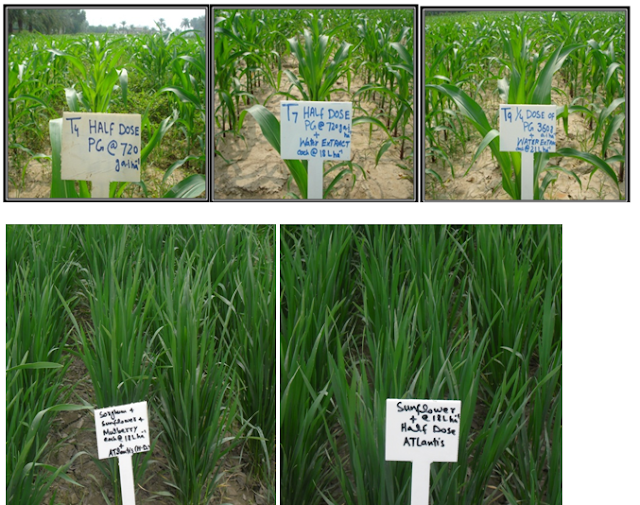