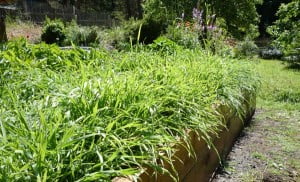 Decomposing of wheat straw may inhibit the root growth of barley.

The residues of the wheat contains acetic acid, butyric acid and iso butyric also have the number of phenolic acids.

Decomposing of corn residues decreased the respiration of tobacco seedlings and causes chlorsis and stunted growth of maize and inhibited the nitrification process in the soils.

Butyric acid, vanillic acid and salicylic acids are present in the corn residues

The allelochemicals released by the decomposition of the rice residues cause the effect on the growth of rice seedling and decreased the yield of rice. Nodulation process, biological nitrogen fixation and grain yield also reduced in soybean by rice stubbles.

Residues of the rice have vanillic and butyric acids

Butyric and benzoic acids are present in the rye residues

Oat straw was more toxic at the maturity and its toxicity remains up to 8 weeks after decomposition.

Aqueous extract of decomposing oat residues were inhibitorier to seedling growth of the test species.

It proves harmful for the maize, oat and wheat growth. It proved inhibitorier to small seeded, broad leaf species. The aqueous extract of sorghum stubble inhibited the seed germination and root growth.

Decomposing barely residues became phytotoxic 7-10 days after incorporating in the soils toxicity reached peak at 20 days and declined after 45 days.

Benzoic acid present in the residues of the barley

Soil microorganisms form the inhibitory substances from the decomposing of the soybean residues.  An aqueous extract inhibit the seed germination soybean, alfalfa and many other.

Leucine and valine acids found in the soybean

Reduced the growth of sorghum seedling

Stunted the plant and reduced the dry weight

Decrease the stem and leaf growth

Acetic, vanillic and oxalic acids are present in the sugarcane residues

Effect on germination, root and shoot length and seedling vigor of rice