Kasur District or Qasur District , is one of the districts in the province of Punjab, Pakistan It came into existence on 1 July 1976. Earlier it was part of Lahore District. The district capital is Kasur city, the birth city of the Sufi poet Bulleh Shah, well known in that region as well as in the whole of Pakistan. The total area of the district is 3,995 square kilometres. In 997 CE, Sultan Mahmud Ghaznavi, took over the Ghaznavid dynasty empire established by his father, Sultan Sebuktegin, In 1005 he conquered the Shahis in Kabul in 1005, and followed it by the conquests of northern Punjab region. The Delhi Sultanate and later Mughal Empire ruled the region. The Punjab region became predominantly Muslim due to so called missionarySufi saints & their swords the landscape of Punjab region. Under Mughal rule, the city flourished and was notable for commerce and trade. After the decline of the Mughal Empire, the Sikh invaded and occupied Kasur District. Under the British Raj, the irrigation canals were built that irrigated large areas of the Kasur District. The predominantly Muslim population supported Muslim League and Pakistan Movement. After the independence of Pakistan in 1947, the minority Hindus and Sikhs were forced to migrate to India while the Muslim refugees Muhajir people from India settled in the Kasur District.

According to the 1998 census, the total population of the district is 2,376,000. Of this 97% are Muslims, 2% are Christians while the rest are Ahmadis, Hindus and scheduled castes. The 22.78% of the population lived in the urban areas. The district is administratively subdivided into 4 tehsils[3] and 141 Union Councils

The district is bounded by the Ravi River in the north-west and river Sutlej in the south-east. Whereas the old course of Beas River bifurcates the district into two equal parts locally known as Hither and Uthar or Mithan Majh. Both of the areas have a height differential of approximately 5.5 meters. The natural surface elevation of the district is 198 meters above the sea level, having a general slope from north-east to south- west. Whereas the east and west ends of the district comprise the flood plains of the rivers Satluj and Ravi, characterized by breaching of looping river Channels braided around meander bars.

Topographically speaking, Kasur District lies between the river Satluj which flows along its boundaries with India and river Ravi which flows its boundary with Sheikhupura District. The districts may be divided into two parts, a low lying or riverine area along the two bordering rivers and upland, away from the rivers. The riverine area is generally inundates during monsoon season. The water level in this area is higher than in the upland. The soil is sandy. The upland is flat plains sloping from north-west to south-west. The general height of the area is from 150 to 200 meters above the sea level. 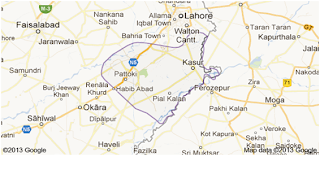 2       DETAILS OF PRIMARY CROPS AND LIVESTOCK