Jhelum District is in the Punjab province of Pakistan. According to the 1998 census, the district had a population of 936,957, of which 31.48% were urban. Jhelum is known for providing a large number of soldiers to the British and later to the Pakistan armed forces due to which it is also known as city of soldiers or land of martyrs and warriors. The district of Jhelum stretches from the river Jhelum almost to the Indus. Salt is quarried at the Mayo mine in the Salt Range. There are two coal-mines, the only ones worked in the province, from which the North-Western railway obtains part of its supply of coal. The chief centre of the salt trade is Pind Dadan Khan. The district is crossed by the main line of the North-Western railway, and also traversed along the south by a branch line. It is located in the north of the Punjab province, Jhelum district is bordered by Sargodha to its south, Gujrat and the Jhelum River to its south and east, Chakwal to its west, Mirpur to its east, and Rawalpindi to its north.

The district of Jhelum, which covers an area of 3,587 km2, is administratively divided into four tehsils: Jhelum, Sohawa, Pind Dadan Khan and Dina, which are divided into 53 Union Councils. It also contains the cities of Jhelum. The population of Jhelum District according to the 1998 census of Pakistan was 936,957 with a population density of 261 people per square kilometre. According the Punjab Education Department’s annual literacy statistics for 2006, Jhelum had a literacy rate of 79% which is among the highest in Pakistan. Human Development Index of Jhelum is 0.770, which highest in Pakistan after Karachi. According to the Gazetteer of the Jhelum District of 1904, 88.7% of the population were Muslim. Inhabitants of Jhelum District speak Potohari, Majhi, and Dhani dialects of Punjabi Language.

The history of the district dates back to the Hindu mythological period of the Mahabharata. The epic represents the Salt Range as the refuge of the five Pandava brethren during the period of their exile, and every salient point in its scenery is connected with some legend of the national heroes. Modern research has fixed the site of the conflict between Alexander and Raja Porus as within Jhelum district, though the exact spot at which the Macedonian king effected the passage of the Jhelum (or Hydespes) has been hotly disputed. After this event, we have little information with regard to the condition of the district until the Muslim conquest brought back literature and history to Upper India. The Janjuas and Jats, who now hold the Salt Range and its northern plateau respectively, appear to have been the earliest inhabitant.The Gakhars, who appear to represent an early wave of conquest from the west, and who still inhabit a large tract in the east of the District; while the Awans, who now cluster in the western plain, are apparently later invaders, the Gakhars were the dominant race during the early Muslim era and they long continued to retain their independence, both in Jhelum itself and in the neighbouring District of Rawalpindi.

In 997 CE, Sultan Mahmud Ghaznavi, took over the Ghaznavid dynasty empire established by his father, Sultan Sebuktegin, In 1005 he conquered the Shahis in Kabul in 1005, and followed it by the conquests of northern Punjab region. The Delhi Sultanate and later Mughal Empire ruled the region. The Punjab region became predominantly Muslim due to missionarySufi saints whose dargahs dot the landscape of Punjab region.

During the flourishing period of the Mughal dynasty, the Gakhar chieftains were among the most prosperous and loyal vassals of the house of Babar. After the decline of the Mughal Empire, the Sikh invaded and occupied Jhang. The Muslims faced severe restrictions during the Sikh rule.

In 1765 Gujar Singh defeated the last independent Gakhars Chief, Muqarrrab Khan, and reduced the wild mountaineers of the Salt Range and the Murree Hills to subjection.

In 1849. Jhelum passed with the rest of the Sikh territories into the power of the British. Ranjit Singh, however, had so thoroughly subjected the wild mountain tribes who inhabited the District that little difficulty was experienced in reducing it to working order.

During British rule Jhelum was a district of Rawalpindi Division, and was larger than the current district of Jhelum. On April 1, 1904, the tehsil of Talagang was detached from the District and incorporated with the new District of Attock.

The old Jhelum district (minus Talagang) covered an area of 2,813 square miles (7285 km2) and included Chakwal tehsil – it was bounded by Shahpur and Attock to the west, and by Rawalpindi to the north – the Jhelum River separated it from Kashmir to the north-east and from Gujrat and Shahpur to the south-east and south.

The predominantly Muslim population supported Muslim League and Pakistan Movement. After the independence of Pakistan in 1947, the minority Hindus and Sikhs migrated to India while the Muslim refugees from India settled in the Jhelum District.Since independence the agriculture and industry of Jhelum developed and it is now important part of Economy of Pakistan. 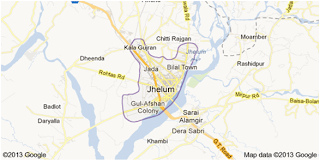