Jhang District is a district of the Punjab province of Pakistan. The city of Jhang is the district’s capital. According to the 1998 census of Pakistan, the district’s population was 2.8 million, of which 23 percent lived in urban areas. By 2008, according to estimates, the population had risen to 3.5 million. The native language is Punjabi, though Urdu is also spoken in educational institutions.

Jhang District covers 8,809 km². Almost all the area is cultivatable land except in the north near Rabwah and Chenab Nagar where the land turns rocky as it approaches the Kirana hills. The western portion of the district holds the Thal Desert, which starts in Mari Shah Sakhira and extends to banks of the Jhelum River far to the west in the districts of Khushab and Bhakkar. There is also an area known as the Sandal Bar arising from Pabbarwala near the Gujranwala boundary. “Bar”, in the local language, means a forested area where there are no resources for cultivation, like water. This area used to be forested and was unable to be cultivated before British colonial rule, when a canal system was installed near the town of Lyallpur (now Faisalabad), which is now the textile industry hub of Pakistan. Between the rivers Jhelum and Chenab is also a small area of Kirana bar, ending at Ghoriwala village. The area alongside the banks of rivers Ravi, Chenab and Jhelum is called Hitthar (area in which flood water reaches), while the upland area between the bars and Hitthar is called Utar.

In 997 CE, Sultan Mahmud Ghaznavi, took over the Ghaznavid dynasty empire established by his father, Sultan Sebuktegin, In 1005 he conquered the Shahis in Kabul in 1005, and followed it by the conquests of Punjab region. The Delhi Sultanate and later Mughal Empire ruled the region. The Punjab region became predominantly Muslim due to missionary Sufi saints whose dargahs dot the landscape of Punjab region. After the decline of the Mughal Empire, the Sikh invaded and occupied Jhang District. The Muslims faced severe restrictions during the Sikh rule. During the period of British rule, Jhang district increased in population and importance.

The predominantly Muslim population supported Muslim League and Pakistan Movement. After the independence of Pakistan in 1947, the minority Hindus and Sikhs migrated to India while the Muslim refugees from India settled in the Jhang District.

Punjabi folk dances such as Jhummar and Sammi originated in Jhang District. Jhummar is a dance for men while Sammi is for women. The district also originated a well-known form of folk music known as “Dhola”, or “Jhang da Dhola”.

Traditionally men wear turbans and dhotis (similar to a skirt or kilt) though in recent years people have started wearing the national dress, the shalwar kameez. Some older women also wear dhotis. When women wear dhotis, the style is referred to called “Majhla” in Jhangochi; th male style is called “Dhudder”. However, it is more common for women to wear shalwar kameez.

The northwestern Jhang District, particularly the area at the west bank of the Jhelum River, is somewhat different in its culture because it is more influenced by the Thalochi culture emanating from the neighboring districts of Mianwali and Bhakkar . 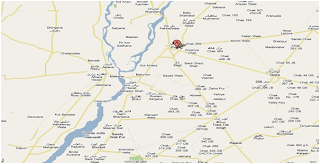