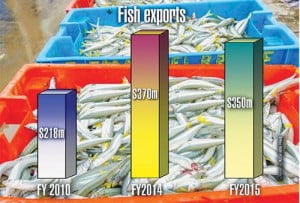 THE seafood sector has a huge export potential. But years of illegal and improper fish hauling, bare minimum processing and a lack of aggressive marketing continue to keep the export growth slower than what it should be. Illegal fishing and smuggling also hit the formal trade.

“But these earnings primarily reflect a low base effect,” says a former chairman of the Trade Development Authority of Pakistan. In FY15, the export proceeds fell to $350m due to stiffer competition from India and Bangladesh. And after the lifting of economic sanctions on Iran “we would be heading for more competition”. Iran has already started capturing a part of Pakistan’s fish market.

People associated with the seafood industry say the country needs to do more in three areas: fish hauling, processing and marketing.

The impact of improper fish hauling on the industry can be gauged from the fact that the country’s documented marine fish production declined from 648,000 tonnes in FY10 to less than 500,000 tonnes in FY15, senior officials say.

Boats laden with fish are often caught illegally in Pakistan’s territorial waters. Such catches are sold into the local market without any documentation. Illegal fish hauls are directly transferred from these boats onto smugglers’ trawlers in the deep sea, from where they move to the coastal belts of China, India and Middle Eastern countries.

But officials claim that in recent months the trend to feed international smugglers’ appetite for fish hauls has weakened due to stricter vigils by the Pakistan Navy and the Coast Guards. However, illegal fishing in the coastal areas of Sindh and Balochistan to feed local demand continues, say officials well-versed with this matter.

The more worrisome aspect of this episode is that most of the time illegal fish haulers catch both grown up and juvenile fish, which naturally slows down the breeding process in some pockets. Similarly, a limited number of fiber glass boats, improper nets and a lack of proper cooling arrangements in fish boats and trawlers are still common.

The country’s track record in fish processing is also bad and resulted in the European Union placing a six-year ban on fish imports from Pakistan. Although the ban was lifted late last year, the threat of its re-imposition remains. That is why the marine fisheries department is now induced to take up cases involving non-compliance of its instructions seriously.

In the first week of October, the department suspended fish and seafood exports to EU markets on its own after it found that hygienic conditions at two auction halls in Karachi had not been improved despite several reminders by the authorities.

In addition to maintaining a hygienic environment in and around the fish-processing areas, another issue is the employment of trained labour and the equipping of fish-processing units with the required technology. Fish-exporting companies often employ low-wage unskilled workers with little or no prior training at all.

As a result, fish-processing suffers in terms of quality and also results in higher wastage. Similarly, machines and instruments used to swiftly and precisely peel shrimp and for tailor-made slicing of fish are not used widely. One can still see the elderly and children doing every job with bare hands at the Karachi Fish Harbour. Many of them work for contractors hired by reputed seafood exporters.

Two fish-exporting companies that were initially cleared by the authorities to resume fish exports to the EU (after the lifting of the ban in August 2014) had made a modest investment in quality assurance and capacity enhancement.

The marketing of seafood is also inadequate. “Our initial overemphasis on the Middle Eastern markets has led us to where we are now,” says a Karachi-based seafood exporter. “The opening up of the Chinese market and greater penetration into African and the Far Eastern markets [during the years when exports to the EU remained suspended] has somewhat compensated for our shortcomings. But we still need to do a lot more.”

The problems facing the seafood sector also reflect in the per-unit price of exports. In FY15, the average export price of fish and fish preparations was $2.5 per kg — lower than the rate fetched by other fish exporting nations like Egypt ($4/kg), say officials of the Trade Development Authority of Pakistan.

Two new fish-processing factories have been set up in Karachi this year to produce value-added seafood products, according to media reports.

The country’s seafood exports are currently less than 30pc of total marine fish production and a little over 20pc of overall fish and seafood output. Additional investment on value addition can help earn $500m in export proceeds even if the current ratios of production and exportable surplus remain unchanged, these officials say.