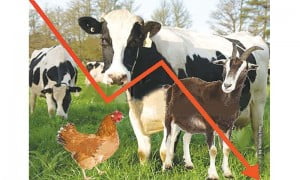 ALARM bells have been ringing in Punjab over the fast declining livestock population. The province has taken drastic measures in the past one week to address the situation after claiming an almost 40pc drop in the count of animals.

It has moved to enforce a strict ban on the slaughtering of female animals, announced criminal and financial penalties for violators, and directed district administrations to punish the culprits.

While a ban on female animal slaughtering has been in place since the Animal Slaughtering Act 1963, it has never been taken seriously by officials, butchers and exporters. But things seem to have changed now.

The provincial government has formed committees at district levels, taken the butchers’ and commission agents’ associations on board, and sent out text messages to individual farmers, prohibiting them from selling female animals for slaughtering

“Such measures were long overdue; had they not been taken right now, the province would have soon lost all its animals’ genetical inheritance to the greed of exporters, who have exported animals weighing even 6-8kg. The loss could have been permanent. There is hardly any way to retrieve the animal population except through imports, which could have further polluted the local gene pool,” said the provincial livestock secretary.

Punjab’s livestock officials say three surveys of the livestock population in the last one year have revealed that the animal population is at least 40pc lower than what the federal figures have been showing in their surveys of 2.6m farming families in 36 districts of the province.

And in some areas, the discrepancy rises to over 50pc. For example, the federal surveys calculated 2.4m animals in four tribal union councils of DG Khan district, whereas the actual figure is only 450,000.

The disconnect is so overwhelming that Punjab has disowned the federal figures and taken drastic measures to save its animal population. Hence, it has re-invigorated the ban on female animal slaughtering, hoping that this would help restart the production cycle, albeit slowly.

The provincial government has formed committees at district levels, taken the butchers’ and commission agents’ associations on board, and sent out text messages to individual farmers, prohibiting them from selling female animals for slaughtering or risk heavy financial fines and imprisonment.

Punjab’s stance on its livestock population is not new. Even in the provincial survey of 2002, it had questioned the federation’s claims and cautioned against unregulated exports and the dwindling animal population. These warnings, however, were never taken seriously by the federal government, which conducted the livestock census in 2006 and stuck to its claims of higher animal population.

These claims about higher livestock growth compensated its failure on the agricultural front in the last four years. The latest Pakistan Economic Survey shows that livestock’s contribution to agricultural GDP increased from 51pc to 56pc.

Punjab’s move right now could be of particular importance because the new livestock census is due next year.

While the federal figures show the livestock population to have risen by about 2.5pc on average every year, some experts wonder why meat prices as well as imports have been skyrocketing year after year if the local animal population has been increasing so fast. They also ask why has the province lost 700,000 acres for fodder to other competitive crops.

All these questions have been raised at appropriate forums, but they have never been answered satisfactorily. The question of an independent assessment by Punjab also arose when it decided to vaccinate all animals and count each cattle head.

The big difference in the federal and provincial survey results also raises issues in mobilising foreign assistance for the development of the livestock sector. Pakistan, and Punjab, has a long list of donor-driven programmes to save and strengthen the sector, and all of these are based on figures that Punjab is questioning.