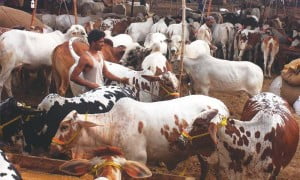 MONEY is flowing fast into the sacrificial animals business, while the growing use of online marketing continues to reshape the market dynamics.

But investors who had spent billions of rupees in advanced booking of animals are not sure if their net return would rise as dramatically as it did in previous years.

The recent ban on the slaughtering of cows and she-goats in Punjab (to ensure faster livestock growth) is being ignored by animal traders on the grounds that it is meant for regular slaughtering, and not during Eid-ul-Azha.

And the Rangers’ ongoing operation in Karachi against criminals and bad elements in political parties has affected the sacrificial animal market in two ways. On one hand, the animal traders are doing business with lesser fear of bhatta (extortion money). But on the other, the local administration’s new-found zeal for implementing the rule of law is making it difficult for the traders to set up temporary markets for sacrificial animals wherever they wish.

Traders are frequenting between Karachi and the rural areas of Sindh or Punjab with greater ease and are bringing in truckloads of sacrificial animals to the city’s main market on Super Highway.

The cut in petroleum prices effective from September 1 has also come as a blessing for them, as they believe that it will help them contain the cost of transporting animals from rural areas to city and town markets.

The Al-Shaheer Corporation, which owns the Meat One brand, has also offered the facility of qurbani to its customers for Rs22,000 per goat and Rs99,000 per cow. The deal includes the delivery of meat.

Online services for buying sacrificial animals and for participating in collective sacrifices are offered by several other web portals as well. And young investors are also using OLX.com and similar websites to sell animals on a limited scale.

The welfare arms of political parties and charities have set their rates for goats at Rs15,000-Rs20,000 and for cows and calves at Rs49,000-Rs72,000 depending upon the size and weight of the animals and the places where the collective sacrifice would take place.

“Animal prices for end-buyers may rise further as Eid-ul-Azha gets closer. But investors would earn no big profits this year,” says a Karachi-based livestock broker who booked 300 cows and bulls in Bahawalpur and 300 goats in Tando Adam in the last week of June.

“I made bookings at an average rate of 60,000 per cow or calf and Rs12,000 per goat and the prices also covered the upkeep and grazing charges for three months,” he told this writer. He said half of the total price of all animals was paid at the time of booking and the remaining 50pc is being paid per truckload of animals on their arrival in Karachi.

This investor is expecting a maximum 30pc return on his investment (Rs22.5m paid as 50pc of the total price of animals in June), which works out at 10pc per month. Since the remaining 50pc price would be paid out of the money he is receiving from local traders, the 10pc net monthly return would not be diluted. “But then it’s not too big, as I have earned higher returns in previous years.”

He represents a class of investment-hoppers, charities, once-a-year-formed groups of crowd financers, NGOs, online traders, and the welfare arms of political parties and religious seminaries. They book sacrificial animals several months before Eid-ul-Azha and earn better returns on their investment owing to lower animal prices due to their bulk forward buying.

No credible estimate is available about such investment, but it certainly runs into tens of billions of rupees.

People had spent Rs350-400bn on purchasing sacrificial animals last year, according to a conservative estimate based on the post-Eid collection of hides and skins (7.4m reported by tanneries but close to 10m by other guesstimates). This year, such spending is expected to remain either unchanged or rise modestly, say sources associated with the cattle trade.

Meanwhile, individual animal-selling arguably fetches higher returns because it is at this stage that the animals are categorised not only by their weight and size but also by their breed or looks, with their prices set accordingly.