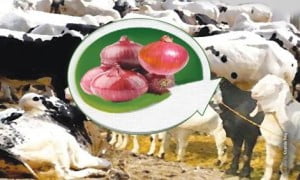 ONION prices have skyrocketed before Eid-ul-Azha in anticipation of high demand and also owing to export orders from India.

And this has happened at a time when local production is not as robust as it was in May-June. Till September 15, the price of onion ranged between Rs50-60 per kg in Karachi’s retail markets and was even higher in Islamabad and in cities of Punjab, according to media reports.

Some wholesalers with their own storage facilities had started hoarding onions from September 1 on news that exports to India have resumed and in anticipation of a rise in demand in the next few weeks, traders say.

Exporters say in addition to India-bound supplies through the Wagah border, Pakistan is dispatching hundreds of tonnes of onions every week to the UAE, Malaysia, Sri Lanka and Bangladesh.

Onion prices rise every year ahead of Eid-ul-Azha. But they move up faster if the Eid falls during the months after May or June and if it coincides with a rising trend in exports

While no estimate of this year’s crop is available, officials of the Ministry of National Food Security and Research say total onion output this year should be around 1.9m tonnes, higher than the previous five-years’ average of 1.8 tonnes.

A decline in onion production in India has not only boosted our exports there but also to Bangladesh, which traditionally relies on India to meet the shortfall in its own onion crop.

Onion prices rise every year ahead of Eid-ul-Azha. But they move up faster if the Eid falls during the months after May or June and if it coincides with a rising trend in exports.

As a result, prices rose from around Rs40 per kg till the end of August to Rs50-60 per kg by the second week of September.

A study by the Sindh Agricultural University reveals that monthly wholesale prices of onions move together in four different markets, i.e. Hyderabad, Quetta, Lahore and Peshawar. Two of these markets are located in major onion-producing provinces and two are not.

Sindh and Balochistan produce about 42pc and 28pc of the country’s overall onion crop respectively, with Khyber Pakhtunkhwa and Punjab contributing the remaining 30pc.

Traders say the wholesale prices of onions usually remain volatile owing to supply shocks of varying degrees in Sindh and Balochistan, the perishable nature of the crop and storage costs etc. In the past, smuggling of onions from Balochistan to Iran and from Sindh to India also used to create supply issues in the local markets, but stricter checks on the borders has now stopped the illegal trade.

Officials of the Sindh agriculture department say wholesale prices of onions remain more or less the same in major markets of the country because trading is concentrated in a few hands.

“Traditional contractors purchase hundreds of tonnes of onions from growers at rates determined ahead of the crop and they find it feasible to supply them across big markets at the same rates. The transportation costs are added separately,” says an onion supplier based in Karachi’s wholesale vegetables and fruit market.

“The wholesale prices show volatility only after these contractors have exhausted their supplies and when second-tier contractors start catering to the remaining market demand. Since they don’t have large, cross-country supply networks and since they often fill in temporary supply gaps, their rates vary vastly, depending upon who enters the market when and who wants to make money how fast.”

Traders say wholesale onion prices move almost on a daily basis owing to a delay in arrivals from fields, the size of the trucks that transport onions from the fields to the markets, export patterns, availability of bulk buyers, and, above all, the demand from vegetable retailers who visit the wholesale market for daily purchases.

According to another study by the Pakistan Agricultural and Scientific Council (PARC), the supply of onions meets local demand easily only in May and June every year. From July till December, gaps in supply start occurring, depending upon the size of the crop and the exact timing of the harvesting of onions in Sindh and Balochistan.

A few years ago, a PARC report had recommended that onion cultivation in Punjab be expanded to break this pattern.

Officials of the Punjab agriculture department say this recommendation has already been implemented and it has also started showing results. From 286,000 tonnes in FY10, Punjab’s onion output surged to 359,000 tonnes in FY14 after additional land was brought under cultivation. The per-hectare yield also went up from 7.96 tonnes to 8.12 tonnes over these five years.

The officials, however, point out that the issue of onion pricing has more to do with the ‘traders cartel’ than the local supply pattern. As soon as second-tier traders based in Punjab get wind of an impending shortage of supply from Sindh, they start raising prices regardless of local stocks, say the officials.