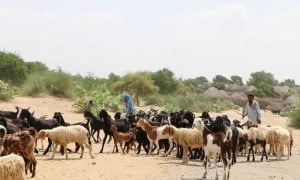 Life took a turn for the worse for inhabitants of Thar when the arid desert was enveloped by an unforgiving drought three years ago, after which it started to consume living beings to quench its thirst.

For Bashir Samejo — a resident of Mithi, the capital of Tharparkar district — misfortune hit home when some 200 of his sheep died of a disease that followed the harsh drought.

Livestock and cattle farming is the sole source of income for the residents of Thar — the backward desert district of Sindh. But for the past three years, rapidly changing climate, altering weather patterns and droughts have snowballed and proved a fatal blow to their bread and butter.

Samejo, however, is not the only one who lost valuable livestock. The drought, which is now in its third year, has brought suffering to almost every cattle-farmer in the district.

Climate change has been a grave concern for all countries — both developed and developing. And the fact that its effects have now crept into Pakistan is no illusion.

Spread over an area of 19,623 square kilometres, Thar desert is home to about 1.6 million people and the number of livestock here is estimated to be six million. Life took a turn for the worse for inhabitants of Thar when the arid desert was enveloped by an unforgiving drought three years ago. — Photo by author

Agriculture in Thar — which is ironically known as the only fertile desert in the world — relies solely upon rain and a year without rain is a year with drought.

This year, however, the nominal rain could not relieve the residents of Thar from the drought which has claimed several hundred lives there in the past three years. Thar, which is usually covered by a green blanket of grass after every rainy season, continues to look barren.

Due to the lack of rain, there have been several outbreaks of different diseases, resulting in deaths of scores of humans and animals.

Khait Singh of Haryar village — some 35 kilometres from Thar’s central town Mithi — spends sleepless nights over the recent death of his animals.

Singh, whose village is an example of Hindu-Muslim unity, is concerned that his cattle perished in such huge numbers.

He tells us that he owned about 300 to 400 cows, sheep, and goats until a few years ago but nearly 80 per cent of his livestock have now died.

As we sit in his autaaq, or drawing room, Khait Singh laments in his broken Urdu that animals belonging to other residents in the village also met a similar fate.

Until a few years ago, the greenery that covered Thar after rainfall invited a large number of tourists, but this year, despite receiving 350 millimetres of rain, the land’s thirst has still not slaked.

Khait Singh shares that it is for the first time in five decades that Thar remains without grass and millet despite rainfall.

According to climate experts, the reason for this is rapid changes in weather patterns; and if adequate steps are not taken urgently, this may give rise to a situation which will be beyond control.

People in Khait Singh’s village hold weather changes responsible for the drought and the deaths of their cattle, he tells us. They, however, believe that this is due to little rain, and are incognisant of the broader scale of climate change.

“Even if there are two or three rains per year, it will be sufficient for us,” he says.

“Several households from our village have migrated to other places, but we are from the Thakur clan and we never migrate however bad the situation may be.” Life took a turn for the worse for inhabitants of Thar when the arid desert was enveloped by an unforgiving drought three years ago. — Photo by Hussain Nagri

A youth in the same village, Jaga Thakur, faces a similar dilemma. Several of his animals have died due to the drought, and he has sold others to earn his living.

How to live with climate change

According to him, Thar has been affected the most due to changes climate patterns, resulting in umpteen deaths of livestock and a wave of migration.

“Climate change is also responsible for increased desertification, whereas the utilising of land for agricultural purposes — which was otherwise used to supply water to the desert — has led to a shortage of water and depletion of forests,” he says.

He stresses on the need to build small reservoirs to store rain water, installation of small reverse-osmosis plants, solar powered pumps, and planting of drought-resistant trees in order to cope with the harsh climate of Thar. Life took a turn for the worse for inhabitants of Thar when the arid desert was enveloped by an unforgiving drought three years ago. — Photo by author

Tanveer Arif, an official of the Society of Conservation and Protection of Environment (SCOPE) Pakistan, also maintains that the droughts in Thar are not mere coincidences, but a result of climate change — which would make droughts a regular feature of the area in coming years.

According to him, 70 per cent of the trees growing in Thar are unusable as fodder for the cattle.

“We ought to decide whether Thar’s land is suitable for agriculture or not, following which we need to plan accordingly,” he says.

Arif asserts that training cattle-farmers to deal with weather changes can be helpful in coping with the situation.

Thar contributes 45 per cent to the livestock needs of Karachi but if these cattle keep dying due to droughts and diseases, Karachi will run short of sacrificial animals in the coming years, he adds.