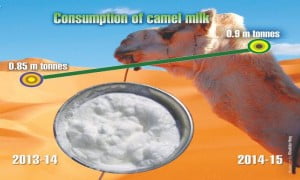 THE local camel population is growing owing to a rising demand for its milk and an increase in its sacrifice during Eid-ul-Azha. The increase in exports of the desert animal to Gulf countries has also attracted livestock breeders towards camel-raising.

“If we assume that the growth rate (between 2006 and now) has remained unchanged till now, the camel population will have crossed the 1.1m-mark,” says an official of the Ministry of National Food Security and Research.

But he is among those who believe that the animal’s actual population, which can be verified only after a fresh census (due next year), must have risen beyond 1.1m because a lot has happened in the area of camel-breeding over the last nine years.

First, the overall mortality rate of camels has remained low despite droughts in Thar and Cholistan, officials say. They add that whenever droughts hit, verifiable deaths of camels come to less than a few thousands.

Second, militancy in Balochistan — the province with the largest population of camels — has had a far lesser impact on camel-raising than on the breeding of other animals. The reason is that the lives of the semi-nomadic camel-breeders have been relatively less disturbed in the remote areas where camels are raised.

“Third, between 2006 and now, we’ve seen a surge in the use of camel milk for its therapeutic value, even in towns and cities. This has served as an incentive for those breeders who were either tied to the supply chain of milk traders or who could frequent city areas, station their camels for a few days and sell their milk on the spot,” says an official of the Sindh agriculture department.

Such spot selling of milk at open spaces in and around busy roundabouts of Karachi has become a regular sight. And regardless of the volumes of such sales, it has served more as an advertising stunt by camel-milk promoters.

Perhaps the most important supporting factor for camel-breeding has been the visible rise in the slaughtering of the animals every year on Eid-ul-Azha. Officials of the Pakistan Tanners Association also point out that there has been a marked rise in the number of camel hides collected for the last several years.

During this Eid-ul-Azha (in late September), the PTA reported that it collected 50,000 camel hides. And while this number was in line with last year’s collection, it was almost double when compared with the mid-2000s, when no more than 25,000 camel hides used to be collected after Eid, say PTA officials.

Camel farm owners say exports to the Gulf region in the 2000s had begun to impact local camel growth,

but the situation has changed in the last five years. Some UAE-based private parties are helping local farm owners in raising camel breeds that are best suited for racing and they are now interested in importing only these animals.

For their meat consumption, the Gulf states, including the UAE and Saudi Arabia, have reduced their imports from here and meet their requirements either from domestic animals or through imports.

Recently, Saudi Arabia had banned the import of camels from Somalia and an opportunity had opened up for Pakistan to fill in this gap. But the Kingdom opted for importing Australian camels instead.

The smuggling of camels from Balochistan to Saudi Arabia via Iran has also stopped due to stricter border vigilance. This, too, has helped in keeping the growth in the camel population intact. However, the export of camels to Afghanistan remains strong because, in line with the trend in Pakistan, the sacrificial slaughtering of camels during Eid-ul-Azha has also surged there, exporters say.

Meanwhile, the demand for camel milk has also seen a gradual rise in the local market as awareness about its therapeutic value has increased. Its consumption is estimated to have risen to 0.9m tonnes in the last fiscal year from about 0.85m tonnes a year ago, say officials of the food ministry.

A Karachi-based confectionary manufacturer whose branded cakes and candies are going to be introduced in the UAE through a Dubai-based trading company told Dawn that they had also received orders for producing chocolate bars filled with camel milk. “And we are thrilled to experiment this. We already have supplies of camel milk lined up from local traders.”

This shows that the supply of camel milk to commercial buyers in towns and cities has become more streamlined. But a few issues remain unaddressed, camel breeders say. Unlike in Sindh and Balochistan where camel milk is supplied through dedicated supply networks, commercial sales in Punjab remain uncertain and most camel breeders of Cholistan have to manage selling the milk on their own.

“That is why they, too, have to look up to the businessmen in Karachi. This adds to their cost of supply, leaving them a nominal profit,” says an official of the Punjab livestock department.