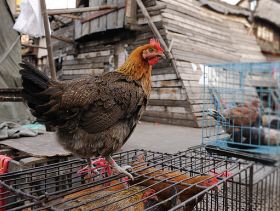 The novel A(H7N9) avian influenza virus originally emerged in humans in China in early 2013. Each winter since, southern China has witnessed an upsurge in human infections.

H7N9 spreads silently in poultry, since it causes little to no illness in birds. It can infect people through direct contact with infected birds or their secretions.

Surveillance in China has shown that H7N9 has become well established in poultry populations in south-eastern parts of the country, and the virus can cause mild to severe disease in humans, and in some cases even death. According to official numbers released by Chinese authorities, H7N9 has caused mortality in roughly 40 per cent of reported human infections.

FAO marked the beginning of Wave 4 on 2 October after Chinese authorities in Zhejiang Province reported the first two human cases since July. According to Dr Eran Raizman, head of FAO’s Emergency Prevention System, these are indicators of things to come.

“We expect human cases to rise sharply in the coming weeks or months, as has happened in previous years. This is due in part to the seasonal behaviour of the virus, helped along by critical gaps in biosecurity commonly found in the poultry industry.”

As shown by over a decade of studies by FAO and partners, a lack of good biosecurity has exacerbated the situation in southeast Asia when it comes to avian influenza viruses.

Mixing of species, lack of flock identification and movement control, close contact between birds at live bird markets and many other factors enable viruses to circulate among poultry and sometimes spread to humans. China’s neighbours continue to be highly at risk due to their close geographic vicinity and poultry trade links.

Moreover, H7N9 is a major livelihood concern. In order to protect the public, poultry with H7N9 infection must be destroyed.

These harsh but necessary control efforts can place great strains on the vulnerable people who depend on poultry. Families often lose their entire businesses and means of subsistence, and many governments may not have sufficient emergency funds to compensate those affected.

“H7N9 is still a serious problem, and it is not going away any time soon,” added Dr Raizman.

“Countries need to push now more than ever for better and safer production approaches in the poultry sector, from farming to transport and marketing. Integrating good biosecurity practices into the way the poultry sector does business is the only way countries can effectively reduce the risks posed by H7N9 and other avian influenza viruses.”