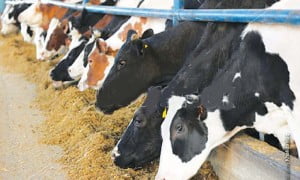 PUNJAB risks losing part of the gains made in livestock improvement over the last one decade as the artificial insemination businesses pack up, alleging highhandedness by a livestock department working under a new provincial secretary.

Out of 16 such centres in the private sector, only six are left and they too are in the process of winding up, according to market reports. The livestock department thinks it is acting under the Breeding Act 2013, which binds it to register every bull at each centre. The debate is going on, but at the cost of the business.

Punjab needs to expand this business while putting in place strict quality controls. But this quality check has now become a bone of contention between the businesses and the livestock department. The businesses allege that a hyperactive administration is destroying them, while the department claims it is applying quality checks.

The onus of finding a solution is on the provincial government. The artificial insemination business is linked to genetic improvement.

The government needs to shift from population genetic improvement to molecular genetics improvement, as is common in most of the world

Punjab has 42pc of the nation’s entire cattle population of 76m (including buffaloes). There are roughly 7m purebred animals — including 4m Sahiwali and 2m Cholistani — while the rest have been termed non-descript. The province has been able to provide artificial insemination services to only 18pc of buffaloes and 29pc of the rest of the cattle-heads.

The limited success of the artificial insemination process also underlines the role of the private sector in technology improvement. So far, this ratio has only been around 30-35pc for buffaloes and around 65pc for other cattle. The problem is that technology improvement is more likely to come from the private sector because of the perennial shortage of official funds for the purpose.

The route that the government has taken to improve animal breeds is time consuming. It has been depending upon population genetics, under which all better-yielding females are registered and separated from the rest of the herd. Then commences the long wait for them to produce bulls, which are then used to multiply the herd.

It takes almost nine years for one bull to have tested progeny and help improve the gene pool. That is precisely why the official institutions established in 2006 and 2007 have just started yielding results.

According to latest data, the buffalo yield in Punjab has improved to 2,300 litres per lactation against 1,800 litres a decade ago. But it is still way below the global average of 5,500 litres and the United States’ 12,000 litres and Israel’s 15,000 litres. So, Punjab still has a long way to go, though it has taken the proverbial first step.

The government needs to shift from population genetic improvement to molecular genetics improvement, as is common in most of the world. It provides a shortcut to improvement by separating better and pure bulls through blood samples rather than waiting for nine years. Once the province has a pool of better bulls, the rest will be easy.

It should also encourage the private sector, through policy incentives, to import semen of exotic breeds for its non-descript animals. In addition, it should also train its human resource and build more laboratories and facilities for this molecular exercise.

Only a combination of policy measures, coupled with administrative help, will get the private sector to venture into an area where official efforts have been failing so far. It is not to deny the government the right to exercise strict quality control, because that is the purpose of the whole exercise. But this quality control should come though expert advice and policy measures, not brute administrative force, as is being alleged by the private businesses.

The failure of the government institutions to register better bulls should serve as a reminder of the limited influence that they exercise. So far, only 15,000 buffaloes and 10,000 other cattle-heads have been registered at these centres.

Thus, it will better for the government to restrict itself to policy measures, like devising a livestock policy and letting the private sector play its role within the framework of that policy. Such a policy has been absent despite the promulgation of an act in 2013 and the passage of six years since the subject was devolved to the provinces.