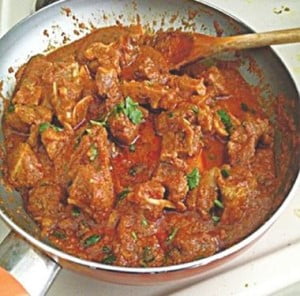 The recent brutal lynching of Mohammed Akhlaq in Uttar Pradesh, India by a mob who suspected their victim of eating beef reminds us how charged the issue of cow slaughter is among conservative Hindus. Before Partition, it was not unusual for a pig’s head to be found in a mosque, and a cow’s in a temple. Both provocations would lead to violent riots.

This is why mutton — the euphemism coined by British memsahibs to denote goat meat in the Raj — has always been more expensive than beef. Around the world, it is the other way around. In Britain, for example, a kilo of beef fillet (or undercut) can set you back by as much as 50lbs after it has been properly hung for four weeks.

In pre-Partition India, well-born Muslims generally did not eat beef because in most cases, their ancestors had converted from Hinduism, and they retained the cultural prejudice against any form of cow-meat. My parents had many Hindu friends, and therefore never had beef cooked in their home. Even after the family moved to Pakistan at Partition, beef was not served at our table. The distinction between bara and chota gosht was clear and permanent, although the price difference was considerable.

After my father retired from Unesco in the early ’70s, and he and my mother returned to Pakistan, the old ‘no beef’ formula was reactivated in the kitchen, somewhat to Ammee’s chagrin. Soon, venison began appearing on her table at regular intervals, especially towards the end of the month. This deer meat was sent by her shikari cousin Ausaf. My father was very fond of venison, and took great pleasure in offering it to his friends.

Despite health concerns with eating red meat, staunch beef-eaters can cook up an impeccable curry

I lived away from in Karachi in those days, but whenever I visited my parents, I was intrigued by the frequency of hiran ka gosht on my mother’s table. When I asked how come Ausaf Mamoo managed to bag a deer in season and out of season, she giggled and replied: “Beta, your Ausaf Mamoo is much too old to hunt any more. I just have the cook buy beef as it’s so much cheaper than mutton, and prepare it according to my recipe so that it tastes like venison. But don’t tell your father or he’ll stop eating it!”

My mother used a khara masala — or whole spice — recipe, and made sure the flavour was concentrated by cooking the dish until it was almost dry. Basically, for a kilo of diced beef (or venison if you can get it), you will need the following ingredients:

After frying the finely sliced onions until they are golden, add the meat and turmeric and sauté until the meat has given up its moisture. Now add all the other ingredients and mix quickly, taking care that the dish doesn’t burn. Next, add four cups of water, bring to a boil, and simmer over a low heat until the meat is cooked. If there is too much gravy, turn the heat on high for a few minutes. Serve hot, preferably with parathas.

Returning to the subject of beef in the Hindu society, we were at a Nepalese restaurant for lunch today. Frankly, I did not have very high expectations of getting a good desi meal in deepest Dorset. But I was served an impeccable beef curry, while the others had a number of starters ranging from Goan beef to salmon tikka. Just about everything was carefully prepared and generously served.

After paying a remarkably reasonable bill, I asked the manager about the attitude of Nepalese Hindus towards beef, and was told cow-slaughter was banned in his country, but lots of people ate it so it was imported from India. Apparently, India is one of the world’s biggest exporters of beef. But buffalos do not enjoy the protection cows do, and so it can be legally slaughtered and exported.