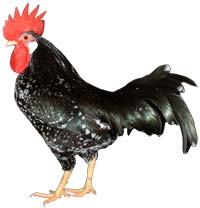 The Ancona Chicken takes its name from the eastern Italian City of Ancona. It is thought they first reached the shores of England in 1851. There are a number of views about the origins of the Ancona, some believing that it is very similar in appearance to the original Mottled Leghorn and that in fact it is no more than a variety of Leghorn, however, it remains a distinct breed and has its own characteristic type. There has been a Blue Mottled Ancona developed in Germany and Holland. An autosexing breed called the Ancobar was created from the Ancona by Professor Lamoureux in America in 1941 and later on in the UK but it has never been popular and is thought to be extinct in the UK.

The following is written by Grant Brereton.

The Ancona in the UK

I think, in terms of sheer beauty, the Ancona is one of the most remarkable of poultry breeds. It derives, perhaps quite obviously from the Italian province of Ancona from where the original British versions were imported in 1851.

Although exported to America in 1888, it was further imports from both the US and Italy that helped perfect the breed type and markings to the specimens we see today.

Many people believe the Ancona to be related to theLeghorn, particularly the Black Mottled variety, as they are not too dissimilar in plumage and shape, hinting at a Mediterranean ancestry.

What attracted me to the breed was the precise and detailed markings of the plumage. The white ‘V-shaped’ spangles at the end of each ‘beetle-green’ black feather make for a stunning pattern and Anconas are very hard to ignore in the show pen.

A well-turned-out Ancona is to be highly commended in the world of fancy poultry. Although the colour breeds true, its finely detailed standard, requiring each feather to be ‘tipped’ and proportional, make producing perfect specimens very difficult. A renowned Ancona breeder, David Speak said that you have to breed 10 in order to get 1 good one.

Anconas rarely go broody and will forage and lay well. Their eggs are white and of a good size. They are quite a hardy breed but can be a little flighty. Perhaps contrary to what one would expect, the bantams are reported as being slightly calmer than the large fowl, but I feel it depends on the degree of handling as youngsters. It stands to reason that any chicken that’s been handled regularly will be tamer than one which hasn’t, in spite of the actual breed.

The Ancona is one of the few breeds to have an option when it comes to comb types. The most popular is the single comb – similar to the Kellog’s Corn Flakes cockerel. The other option is a rose comb, and although in few hands, these specimens can still be seen at shows today. Many fanciers aren’t comfortable with this and feel that a breed should very strictly have only one form of comb. The Orpington Club have recently altered their standards to only allow the single comb, whereas until recent times, rose combed specimens were permissible on the show bench.

Of all the mottled breeds of poultry the Ancona can proudly lay claim to being the most uniform and precise, especially in terms of markings. They should not be regarded as a beginners breed and it would be easy to lose the marking quality in only a few generations if no thought was given to ‘selection.’ Some specimens are shown which lack mottling in the tail area and these quite rightly are overlooked by the judges.

If you are planning on obtaining some Anconas for your garden, it would be best to locate an established breeder who will have the best quality stock.

Plumage of juveniles changes after the first moult. The white tips to the feathers get larger and there are more of them after each moult.