Cherry is a fleshy stone fruit belongs to genus Prunus of family Rosaceae. Most of edible cherries are extracted from either Prunus avium, the wild cherry (sometimes called the sweet cherry), or from Prunus cerasus, the sour cherry. Annually total world production of cultivated cherry fruit during 2007 was about two million tones. Around 42% of world production originated in Turkey, Europe and around 14% in the United States. Major cherry producing countries include Turkey, USA, Iran, Italy and Russia. Cherries contain high nutritional and medicinal importance. The berries of cherry consists of high anthocyanin’s (the red pigments) contents which reduce pain and inflammation and help against heart diseases and diabetes. About 100g of edible part of cherry fruit contains 16g carbohydrates, 13g sugars, 2g dietary fiber, 0.2g fat, 1.1g protein, 7mg Vitamin-C and 0.4mg iron providing 263 kJ (63 kcal) energy. In Pakistan, cherry cultivation is successfully being done at temperate zones including Quetta, Pishin, Ziarat, Kalat, Zhob Mastung, Loralai, Swat and Murree. In Baluchistan, cherry is grown on about 611 hectares on commercial basis with an annual production of about 1,563 tones.

Murree Mountains containing sufficient amount of clay soil, enrich with organic matter and after terrace formation the deciduous fruit plantation can be done. However, high humidity, spring frost and hail storm are the limiting factors which can creates hurdle in cherry growth. The present study was conducted to find out some suitable varieties for cultivation at Murree Hills area for good physiochemical study. Moreover, the commercial activities at Murree are seasonal i.e. from April to August, depending on the visit of local as well as foreign tourists. So there is a need to find out some varieties which may ripe between months of June and August because most of the varieties ripe during September.

Sweet cherry requires high chilling hours. It is grown successfully in areas between 2,000 and 2,700m above sea-level, requiring 1,000-1,500hr chilling period during winters. An annual rainfall of 100-120 cm, well-distributed throughout the year is desirable but high rainfall during flowering results in heavy blossom wilt. At the time of fruit ripening heavy rains causes fruit cracking. Therefore, it should be dry at the time of fruit ripening. A well-drained deep sandy loam soil with pH 6.5-7.0, which can hold moisture during summer season are most suitable. The cherry plant is very sensitive to water logging, so heavy soil should be avoided.

Cherry cultivation is confined to hilly areas on sloppy lands. The planting is done on contour or terrace system. However, in valley areas square system of layout is recommended for the establishment of an orchard. The planting distance depends upon the soil fertility and the rootstock used. Trees can grow to 12 m and with good management. Cherry cultivation produce significant crops from about 6 years and can continue to produce fruit for around 100 years. A spacing of 6m x 6m is recommended for plants raised on seedling rootstock. Pits of 1m x 1m x 1m size are dug and filled with a mixture of 35-40 kg farmyard manure and half kg super phosphate one month before planting. The pits are filled at last up to 15 cm above the ground level. December-January is the planting time.

Unwashed cherries in plastic bags or pour them into a shallow pan in a single layer and cover with plastic wrap to minimize bruising. Store cherries in the refrigerator and cherries in good condition should last up to a week. Trees are pruned lightly until after they come into production the third season.  Sweet cherries are trained to a central leader or modified central leader system.  Annual pruning during dormancy is used to develop and maintain tree size and shape.  Pruning also opens the canopy for more effective pesticide coverage.

Harvest and storage: Fresh market sweet cherries are hand-harvested leaving the pedicels intact.  Fruit maturity can be determined by color and the use of a refractometer that measures the level of soluble solids (sugar). Cherries should have field heat removed immediately after harvest.  Because the fruit has a very short shelf life, cherries need to be moved to market as quickly as possible.  Sweet cherries can be stored for no more than 10 to 14 days at 32° F. 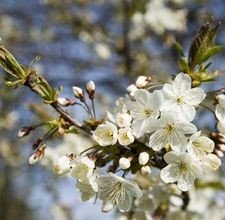 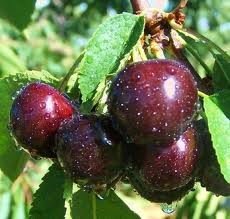 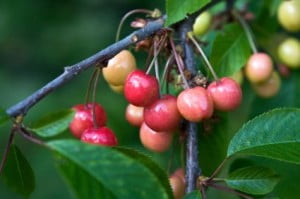 (Department of Horticulture University College of Agriculture, University of Sargodha).