Food is essential part of life, human body requires different types of ingredients like protein, carbohydrate, fat, vitamin and minerals to perform its daily activities. Fruits and vegetables are the huge blessing of Allah Almighty. Pomegranate is known as “The Fruit of Heaven” and is considered among best fruit in the world due to its nutritional importance.

It is native from Iran to northern India. Its major producers are Afghanistan, Iran, Saudi Arabia, India, Palestine, China, Africa, Italy and America. It has more than 760 varieties in the world.

Pomegranate fruit is delicious, nutritious and is used either as fresh or juice. It has anti-oxidative properties, cholesterol dropping ability. It is also a remedy for number of diseases including blood pressure, diabetes. body stress, joint diseases, anemia, diarrhea and prevents from cardiovascular diseases. Its seeds as well as skin are used after grinding for the cure of stomach diseases and it also helps in digestion. 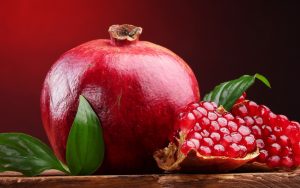 In Pakistan, it is still grown as minor fruit on nine thousand hectares with forty thousand tons’ production.  Balochistan is the major producer of pomegranates, although KPK and Punjab are also producing pomegranates in isolated areas on a small scale. Pomegranate is a deciduous shrub with 5 to 8-meter height. It grows easily in tropical and sub-tropical regions of world. It requires well drained loamy soils and has ability to survive in salt affected soil up to certain limit. It is propagated both sexually and asexually. However, asexual production through cuttings is an economical way to propagate and we are able to get its commercial production after 3-4 years of planting.

The yield of pomegranate is minimal due to less area of production which can’t satisfy the requirement of country’s population. The average price of 1 kg of fruit in market is about 100 rupees, a common man of our country can’t afford and everybody in the society has equal right to enjoy the seasonal commodity.

Pakistan being an agro based economy has best agro ecological pockets for production of fruits in various regions, our climatic and soil conditions strongly favorable for the production of the fruits especially pomegranate. But due to lack of awareness among farmer, poor phyto sanitary measures, poor management, aging and decline of orchards, less adoptability of modern techniques, lack of co-ordination between research and extension sector, poor market infrastructure and poor post harvest handling techniques are major limitations for the successful production.

Well trained, specialized extensionists and horticulturists should be engaged which guide farmers about innovative techniques like high density plantation and modern approaches. The government should also try to finish gap between farmers and processing units it will be helpful to export our processed products to international market.In short, pomegranate production is a long-term strategy to eliminate poverty, hunger and access to healthy diet.