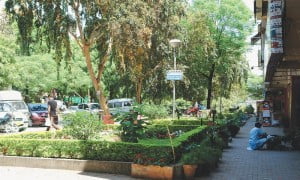 There is much to do to mitigate the disastrous effects of future heatwaves in our cities and — as Pakistan currently ranks number eight in countries to be most affected by ‘Climate change’ — in all other urban and rural areas of our climatically diverse country too. As gardeners, you each have an extremely important role to play in this crucial task and this month is ideal for making a start.

First and foremost, it is imperative to understand that the ‘Deforestation’ repeatedly stressed during the intense heatwave which hit Karachi in June, does not solely refer to the massive losses of forest cover that has occurred across the country over the last couple of decades or so. It also includes the loss of trees in our cities as every single tree has a bearing on localised atmospheric and climatic conditions, as do plants / grass in green belts, on roundabouts, in gardens and parks everywhere.

Trees — and other plants — breathe in carbon dioxide and exhale oxygen, plus, the transpiration on leaves and grass, helps to reduce temperatures. Replacing trees and greenbelts with high-rise concrete and glass structures, for example, results in a rise in temperature which is further exacerbated by these structures soaking up heat during the day only to release it at night, thus keeping temperatures high around the clock. Bad urban planning also means that many such buildings actively prevent breezes from circulating so the atmosphere remains almost static, shockingly polluted by fumes and so viciously hot during a heatwave that it can be almost impossible to breathe. The combined effect of the aforementioned causes what is known as a ‘Heat Island Effect’, magnifying heatwaves until they are — as so many unfortunate people know to their cost — deadly furnaces.

Changing climate and increasing heat are a direct result of deforestation; this in turn calls for planting as many trees as possible

The majority of people though have short memories — especially if they were fortunate not to have lost loved ones in the horrendous June scenario — and governments, national and local both, have even shorter ones; the latter having a distinct tendency to forget any disaster as soon as optimum publicity has been gained when they habitually sweep empty promises underneath the nearest carpet. This, gardeners, is why it is you — along with anyone else you can rope in — must take on the task of re-greening everything and everywhere you possibly can.

Planting even a single tree will, in time, assist in overcoming future heatwaves / Heat Island Effects but, as I am not one to make empty forecasts, it must also be made clear that, for the foreseeable future, ‘Extreme Weather Events’ such as these, will continue to happen unless and until mankind makes massive changes in lifestyle and expectations of the same.

Having sounded off … let’s now take a look at what you can do:

• This being summer monsoon tree planting time, planting saplings is an obvious thing to do. It is, however, not just a case of planting any sapling which happens to be available though as some, especially those imported exotics, will not — without extra care and a criminal amount of water — survive the harsh conditions offered by our cities and towns. Planting saplings of indigenous species, such as Melia azadiracta (Neem), Tamarinda indica (Imli), Moringa pterygosperma (Drumstick tree) and one of the many, extremely tough, Acacia species makes far more sense. Otherwise, opt for fruiting trees over purely ornamental ones as fruit, even if only the birds get to enjoy it, is an essential environmental input.

• Different tree species have different growth characteristics and take different lengths of time to mature enough to begin to make a difference to the localised climate. Please discuss your exact requirements, size of planting / growing area, anticipated spread of tree roots / branches with your selected nursery so that you plant a suitable species rather than something which will create problems in the years to come.

• Preparing tree planting holes, planting saplings and caring for them, have all been covered in this column before. Due to lack of space, I will not repeat them here but leave it to you to refer to back issues, on the internet, if needed.

• Plant trees in your gardens, in empty plots, on ‘wasteland’ and anywhere else you possibly can — resorting to ‘Guerrilla gardening’ tactics if need be!

• Some countries, France for instance, have made it mandatory to have either gardens or solar panels on rooftops. We need to follow suit. Creating rooftop gardens not only insulates buildings but helps — if there are enough of them around — to improve localised climatic conditions, plus, to reduce temperatures all round. If you have a suitable roof then green it up please!

• Pressurise whoever you can think of to green up your locality and make sure that they not only do it, but continue to care for it afterwards.

Now … let’s take a general look at what to do in your garden this month:

Seed sowing is, for the majority in Pakistan, a year round occupation and August, no matter how hot and steamy, is no exception. But do ensure that seed trays / pots are placed in partial shade, have protection from any monsoon rain that arrives and remember to water them — in an evening — as and when required.

For those of you with flowers in mind, sow seeds of petunias, dianthus, antirrhinum, salvia, cineraria, gerbera, carnation, geranium, hollyhocks, rudbeckia, begonia, phlox, scabosia, rannunculous, freesias and both seeds and tubers of dahlias.

Secateurs in hand, make a tour of inspection and, in the process, prune back any shrubs or climbers which have — or are threatening — to grow out of control or, at the very least, carry a notebook and pen instead of secateurs and make a ‘To do’ list all of your very own!