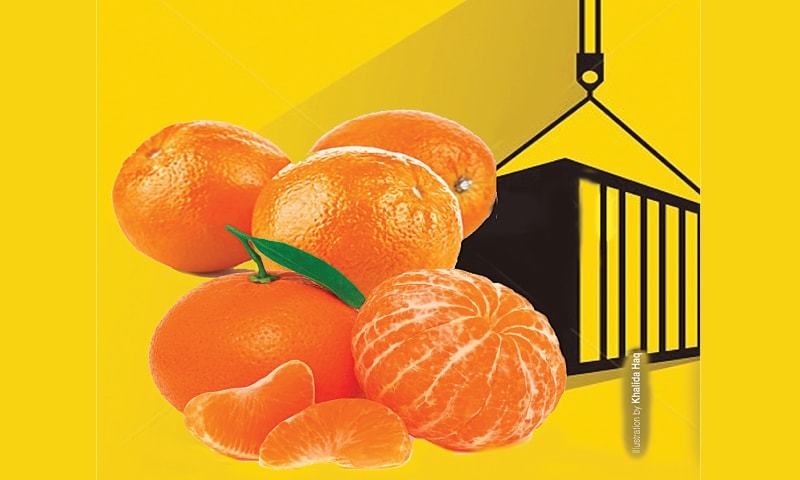 AS the kinnow export season officially commences from tomorrow, exporters dread bad times ahead owing to the damage done to some top-quality crop by the weather and the possible absence of a strong appetite in traditional export markets.

Hailstorms have hit the core kinnow belt — Sargodha division — as well as some sub-core areas this year. Many orchards, especially those linked to exporters, have suffered quality damages ranging between 50-70pc.

While the damage caused by the weather may not translate into lower volumes — which, according to Pakistan Horticulture Development and Export Company, may still touch 2.2m tonnes in Punjab — the quality of the fruit poses a risk to exports.

Another fear of exporters is the devaluation of currencies of Russia and Indonesia. Both of these are traditional markets for Pakistani kinnow and jointly absorb around 25pc of our overall exports.

As a result, the Russians want Pakistani exporters to provide them kinnow for cheap. The growers’ cost of production is escalating with every season because of domestic factors. This huge disconnect will rob kinnow of its competitive edge.

The government has fixed the fruit’s export target at 400,000 tonnes against actual exports of 350,000 tonnes last year and insists that it is achievable. While acknowledging the damage caused by hailstorms, it disputes the extent of these damages

Similarly, the Indonesians, who visited Pakistan this year to inspect the supply chain and cleared kinnow of issues related to maximum residual limits (MRL), have also seen their currency sliding and want Pakistani exporters to slash their prices accordingly.

On top of it, they have opened the window for exports for only two months. They want their imports to begin in February and run through March, after banning them for December and January owing to their own domestic reasons.

This leaves the Gulf region, Afghanistan and Iran, which have limited capacity to absorb the fruit even in the best of circumstances. Other high-end markets like the United Kingdom or the European Union will look at the quality issues.

However, the government has fixed the fruit’s export target at 400,000 tonnes (against actual exports of 350,000 tonnes last year) and insist that it is achievable. While acknowledging the damage caused by hailstorms, it disputes the extent of these damages. A categorisation exercise is underway to ascertain the extent of harm done to the crop, but the exporters’ assessment is certainly an exaggerated one.

Pakistan should be able to at least achieve last year’s export figures, if not meet the official target. Canker damages are certainly less than last year and so were those from fungi. And while hailstorms certainly hit the crop, their toll is yet to be assessed properly.

Beyond the official optimism lies the reality of last season, where weather had helped the fruit achieve an exceptional quality that had not been seen for years. The Sargodha division, which contributes over 50pc of national production, saw 60pc quality harvesting last year against 47pc in the previous year. This 13pc jump in quality helped exporters achieve the export volume of 350,000 tonnes, valued at over $200m.

Meanwhile, export consignments for Afghanistan were held at the border last week for quality issues and it took official intervention to get them released.

According to field reports, only 10pc of factories have started their operations in the Sargodha area, with less than a week remaining from the official start of the export season.

The exporters claim that they have less than a dozen orders on hand and are finding it hard to locate quality fruit that can meet quality standards of even low-end markets like Iran. The officials, on their part, are also advising the exporters to initially focus on these soft markets so that quality issues don’t besmirch the season right from the beginning.