Grapes are not new to Pakistan they are being cultivated from decades on about 13000 hectares and annual production is about 49 thousand tons, most of the acreage is in Baluchistan and Khyber Pakhtunkhwa and now somehow shifting toward Punjab.

Punjab; Is the most populous of all the five provinces of Pakistan about 56% of the total population is dwelling there, geographically it consists of the alluvial plains of the Indus river and its four main tributaries, the Ravi, Satluj, Jehlum and Chanab rivers.  It has an area 79,284 square miles consisting of both irrigated and arid regions about 53% of its total area is under cultivation. Soil of Punjab varies from very fertile to less fertile regions, mainly depends upon the climate, vegetation, and irrigation facilities. The Climate is quite favorable for multiple crops.

Grape is one of the most lucrative (profitable) summer fruit native to warm and temperate climate. Apparently it is seems that it can be easily maintained here in Punjab due to favorable climacteric conditions and sometimes seen in parks, gardens  and receptions of hotels. Previously there is no perception to practice grapes on a commercial scale, but now through government efforts the scenario is quite different, progressive farmer are attracted toward long term lucrative crops due to fluctuating prices of agronomic crops.

The complication in commercial production in Punjab is that it lies on the margin of the monsoon climate, when the grapes are in ripening stage the monsoon is at its peak. With the cloudy days ripening time is prolonged and with the rain fruit quality is depreciated; firstly It causes  the flavor to be diluted (low brix level)  and sugar/acidity balanced is thrown off hence decreasing shelf life, it’s a misconception here that water is only up taken by the roots and the effects of rain can be countered by draining field but internationally it is also evident through experimentation that grape skin is also a great factor of transpiration , secondly rains results fungal diseases like powdery mildew, phomopsis ( leaf spot), and botrytis bunch rot.

Mitigating the effects of rains on viticulture government has taken many initiatives to eradicate losses National Agriculture Research Council (NARC) has developed three high value grapes varieties Parlette, Kings Ruby, and Flame seedless that have ability to mature prior to monsoon. Pakistan Agriculture and Meat Company (PAMCO) entitled Bahawalpur as a grape valley and promoting viticulture by inciting grape orchards and nurseries.

In Pakistan vines are managed on cement pillars (4×4 inches in width and 7 to 8 feet in length) equipped with metallic wires. The wines shred their leaves in winter and become dormant, they were pruned in late December to start  January. Cutting with the pencil thickness or more were segregated and cut into small cuttings of 12 to 14 inches long having 4 to 5 buds, then these cuttings were pilled and buried in sand for pre callusing. They were buried there for 4 to 6 weeks, then planted in polyethylene bags having well fertilized soil. Then they were watered at regular intervals and covered with a transparent polyethylene sheet to conserve moisture required for sprouting and rooting.

Here recycled beverage bottles were used to create a greenhouse effect to break dormancy of a few months old vines instead of polyethylene and tunnel structure to reduce the production cost it can also act as a shield against weedicide used during cultural practices. 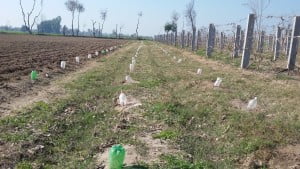 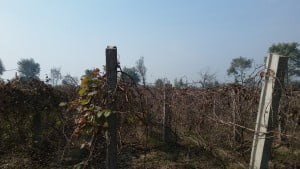 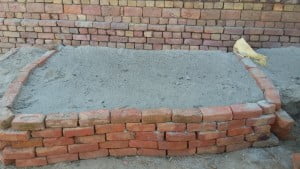 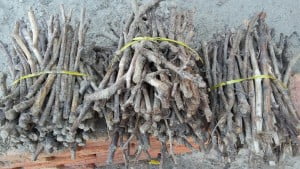