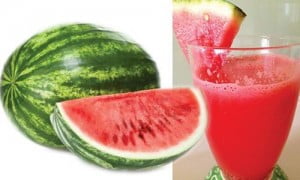 On a sultry day when temperatures are rising and one is soaked in perspiration, what could be better than a glass of cold water to quench one’s thirst? Well, there is something even better — a heavenly glass of chilled watermelon juice.

Even if eaten on its own, the fruit itself is very refreshing. Cut it into pieces, chill it in the refrigerator and enjoy at any time of the day. Another way to serve is to cut it in small pieces, add a little sugar, crushed ice and enjoy the cool fruit and juice at the same time. The refreshing quality and sweet taste of watermelon help to combat heat and also provide a guilt-free, low calorie dessert for all to enjoy.

Watermelons are mostly water — about 90 per cent — but this refreshing fruit is packed with nutrients. It has significant amounts of vitamins A, B6 and C, antioxidants and amino acids besides modest amount of potassium. Few people know that this juicy fruit is among the best sources of lycopene — a phyto-nutrient found in red fruits and vegetables and have been linked with vision, heart health, bone health and cancer prevention. Always buy a fully ripe watermelon as the redder it is, the higher is the concentration of lycopene as well as beta carotene, so you get the maximum amount of the healthy nutrients. It is also a powerful antioxidant which is thought to have anti-inflammatory properties.

Being rich in water it is a natural diuretic and good for hydration; it lowers blood pressure and helps in liver and kidney troubles. Because of its water and fiber content, watermelon helps to prevent constipation and promote regularity for a healthy digestive system. Plus, this quintessential summer snack is fat-free, very low in sodium and has only 80 calories per cup.

Watermelon and its juice have been shown to reduce muscle soreness and improve recovery time following exercise in athletes. Researchers believe this is likely due to the amino acid, L-citrulline, present in watermelon.

The kernel of watermelon seed is a component of nervine tonic. The juice of watermelon treats dryness of the intestines and kills thirst.

To top it all, due to the presence of vitamin A and C watermelon is good for our skin and hair; vitamin A is necessary for the growth of all bodily tissues, including skin and hair and is required for sebum production that keeps the hair moisturised.

Despite its benefits, watermelon should not be taken in excess. Eaten in abundance on a daily basis can result in too much lycopene or potassium in the body. Excessive lycopene can cause nausea, diarrhoea, indigestion and bloating, while too much potassium can result in irregular heartbeat and other cardiovascular problems, as well as reduced muscle control.

Plus, being relatively high in sugar content, watermelon lovers need to be mindful of their sugar intake.

It’s a fruit and a vegetable. The watermelon is part of cucumbers, pumpkins and squash family known as cucurbitaceae.

All parts of a watermelon can be eaten, even the rind.

The watermelon probably originated in the Kalahari Desert in Africa.

Watermelon’s use spread along the Mediterranean Sea and by the 10th century, it had found its way to China, which is now the world’s top producer of watermelons.

Egyptians placed watermelons in the burial tombs of kings to nourish them in the afterlife.

The first cookbook published in the United States in 1776 contained a recipe for watermelon rind pickles.

The watermelon is the official state vegetable of Oklahoma.

According to the Guinness World Records the world’s heaviest watermelon was grown by Lloyd Bright of Arkadelphia, Arkansas, in 2005, weighing 121.93kg.

It’s so sweet that it has led some countries to extract sugar from it.