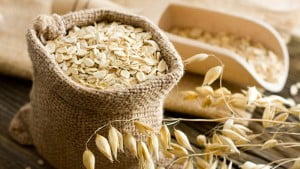 Oats, known scientifically as Avena sativa, are a hardy cereal grain able to withstand poor soil conditions in which other crops are unable to thrive. Oats gain part of their distinctive flavor from the roasting process that they undergo after being harvested and cleaned. Although oats are then hulled, this process does not strip away their bran and germ allowing them to retain a concentrated source of their fiber and nutrients. Wholegrain oats are a great source of carbohydrate, which is an important source of energy for the body. All carbohydrates are ultimately converted to, and absorbed into the blood in the form of glucose, which is the brain’s preferred source of fuel. In addition oats can also make a valuable contribution to our protein intake.

Low-carbohydrate (low-carb) diets usually involve cutting out most wholegrain foods and tend to be higher in fat. Unfortunately the body can only store carbohydrate in limited amounts in the liver and muscles and our diets must provide enough to meet our daily needs. Oats are a wholegrain and population based (observational) studies show that people with a greater wholegrain intake have a reduced risk of heart disease when compared with low wholegrain consumers.

Research shows that eating just three servings of wholegrain a day may help to reduce the risk of heart disease by up to 30% as part of a healthy diet and lifestyle. Also, oats contain beta-glucan, a soluble fibre that has been shown to actively lower cholesterol, which may reduce the risk of heart disease. Oats may contribute to achieving and maintaining a healthy weight, as they are typically low in fat, contain fibre and tend to have a low glycaemic index (GI), meaning they tend to be absorbed and digested more slowly, releasing energy slowly – helping you feel fuller for longer. Studies show that people who eat wholegrain foods such as oats are less likely to gain weight over time. Wholegrains such as oats contain fibre, which is important for maintaining a healthy digestive system. When fibre passes through the bowel, it absorbs a lot of water and increases the bulk of any waste matter that leaves your body. Fibre helps speed the passage of waste material through the digestive system, giving potentially harmful substances less time to linger in the bowel and ensuring regular bowel movements. Those suffering from coeliac disease may still be able to eat some wholegrains. Grains which don’t contain gluten include rice, corn, buckwheat, millet and oat. And people with coeliac disease may be able to tolerate pure, uncontaminated oats. Again, this should be considered on an individual basis with the support of a health care professional.

Buy small quantities of oats at one time since this grain has a slightly higher fat content than other grains and will go rancid more quickly. Oats are generally available in prepackaged containers as well as bulk bins. Just as with any other food that you may purchase in the bulk section, make sure that the bins containing the oats are covered, free from debris, and that the store has a good product turnover so as to ensure its maximal freshness. Smell the oats to make sure that they are fresh. Whether purchasing oats in bulk or in a packaged container, make sure there is no evidence of moisture.

Store oatmeal in an airtight container in a cool, dry and dark place where they will keep for approximately two months.