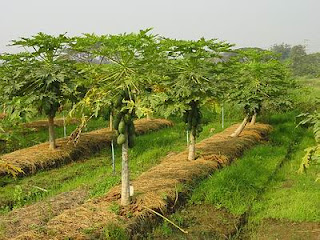 (Deccan Herald) N. R. Chandrashekhar of Nenamanahalli in Kolar taluk has been raising ragi, tur, paddy and mulberry on rain-fed land. In 2010 September, he planted 500 papaya saplings at a distance of seven feet, in rows of ten feet apart. He has not used any chemical fertilisers or pesticide on his crop.

A farmer in Kolar has raised papaya through organic farming methods. He has raised the crop on a one-acre plot.

(Deccan Herald) N. R. Chandrashekhar of Nenamanahalli in Kolar taluk has been raising ragi, tur, paddy and mulberry on rain-fed land. In 2010 September, he planted 500 papaya saplings at a distance of seven feet, in rows of ten feet apart. He has not used any chemical fertilisers or pesticide on his crop.

This year, at a time when farmers were a worried lot because the monsoon rain has not helped their crops, Chandrashekhar was basking in the success of his papaya crop. The Kolar region is a dry, arid area, and the water table has sunk. Fields that are dependent on rain have gone dry.

This organic farmer, has, however, ensured that not a drop of rain that falls on his land goes a waste. He has harvested rain water by way of percolation pits dug on his farm. He thought of percolation pits, because he was not satisfied with the irrigation tank he had earlier constructed at a cost of Rs 25,000.

“Even when there is no rain, the crops on my field won’t go dry, thanks to the moisture content in the soil. Also, because I administer a lot of green-leaf manure, there is a green cover on my land, and the temperature reduces drastically,” Chandrashekhar explains. He points out that a few years back, after raising ragi, he grew mushrooms on his crop.

He then mulched the mushroom. “Nearly six-eight tonnes of green compost, and the mushroom compost have ensured that the soil is rich with nutrients,” he adds. The ringspot pest that has attacked papaya farms in the district has not affected his papaya farm, thanks to his organic farming methods.

“A ton of papaya fetches a price of Rs 16,000-Rs 18,000. I am expecting at least five to six tonnes of papaya on my farm,” he points out. Shortly, he is planning to grow mulberry as an intercrop. Once the papaya is fully harvested, mulberry will be the principal crop on his land.