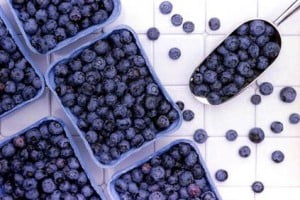 Gum disease – periodontitis, a common condition among adults – occurs when bacteria form biofilms or plaques on teeth, and consequently the gums become inflamed. Now scientists have discovered that wild blueberry extract could help prevent dental plaque formation. Their report in the Journal of Agricultural and Food Chemistry could lead to a new therapy for periodontitis and a reduced need for antibiotics.

Researchers at Quebec’s Laval University tested extracts from the wild lowbush blueberry against F. nucleatum, one of the main species of bacteria associated with periodontitis. The polyphenol-rich extracts successfully inhibited the growth of this bacteria as well as its ability to form biofilms. It also blocked a molecular pathway involved in inflammation, a key part of gum disease.acs.org

The largest living land mammal – the African elephant – is only a third to a quarter of the size of the indricotherium, a 20-ton prehistoric member of the rhino family. Exhibits about large beasts, both currently alive and long-gone, are included in “Extreme Mammals: The Biggest, Smallest and Most Amazing Mammals of All Time” – a touring exhibition opening Sept. 26 at the N.C. Museum of Natural Sciences in Raleigh. It includes touchable fossils, taxidermied specimens and displays that explore mammalian headgear, teeth, tails and reproduction. One highlight: a 15-foot-high lifelike model of an indricotherium. The exhibition celebrates the diversity of mammals and the current extinction many species now face. It runs through March 2016. Admission: $15; $10 for ages 3-12. Admission to the rest of the museum remains free.

About that dust that’s just sitting around your house …

An analysis of dust from 1,200 homes across the continental United States provides new information about the fungal and bacterial communities sharing the great indoors with us.

“Our homes are ecosystems that we spend a lot of time in, and so we approached this with a very general question,” said Noah Fierer, a microbial ecologist at the University of Colorado at Boulder and one of the study’s authors. “What type of microbes and fungi do we see in our homes?”

The study, which appears in Proceedings of the Royal Society B, learned the types of bacteria found in a house were significantly influenced by the female-to-male ratio of its residents and whether pets were present. Indoor fungal communities, on the other hand, depend largely on the location of the home.

“Most fungi are coming from outside via windows, ventilation and your clothing,” Fierer said.