Citrus is one of the world’s major fruit crop. Citrus fruit belongs to the dicotyledonous family rutaceae and is  grown in tropical and subtropical climates in more than 135 countries .It is very famous fruit for its delicious taste and dietary importance. Citrus tree is native to the areas of northeast India and China. Citrus cultivation is known to be started in Nippur (Mesopotamia) area in 4000 B.C. The major Citrus producing countries are Brazil (17.91 %), USA (14.32 %), China (11.70 %), Mexico (6.15%), Spain (5.39 %) and India (4.74 %). All these countries are contributing more than 60% of the world citrus production (FAO, 2012).While Pakistan, Mexico, Spain, Italy and Egypt contribute 25 % of the world total citrus production. There are many cultivars of Citrus in Pakistan viz; grapefruit, mandarin, lime, lemon and kinnow. Among these, Kinnow is the most important cultivar grown in our country. Pakistan produce 2 % of all fresh fruits produces in the world (FAO, 2004). Citrus is an important fruit of Pakistan and Pakistan  ranks at 10th position in citrus production in the world (Sabir et al., 2010). Citrus is growing on an area of 204.07 (000) hectares with an annual production of 2334 (000) tones (FBS, 2012). Pakistan produces almost 12.0 million tons of fruits and vegetables annually, of which Citrus fruit is ranked 1st in terms of production followed by mango, dates and guava. Citrus trees are evergreen and fruits having nutritious juicy flavor due to this their cultivation is increased all over the world. It is famous for its nutritive value and some medicinal uses .it is important for two reasons one is fresh fruit and other one is processed products of citrus. Pakistani citrus fruit is famous in international markets of Asian countries like Singapore Malaysia and European zone in Britain and Germany with some export to Middle East countries. Maximum area under citrus cultivation in Pakistan is by kinnow mandarin which is above 70 %. Pakistan is blessed with a climate ideally suited to the farming of all kinds of fruits especially for the citrus production which is rich in taste and juice. In Punjab province the Sargodha district is a famous hub for citrus production in Pakistan. Citrus trees can be grown on a wide range of soils, including deep sandy loam, loam and clay loam. Due to these reasons the Sargodha district is famous in Punjab for citrus production. Temperature is the main factor affecting, time of blooming, maturity, production and fruit quality of citrus.

The citrus fruit is vulnerable to different diseases by many pathogens. These diseases and disorders are more than hundred and are caused by viral, fungal and few bacterial pathogens from nursery level to fruit bearing stage resulting in substantial losses. Citrus scab reduces the external quality of citrus fruits produced for the fresh market and caused 15 to 60 % percent losses in citrus fruit especially to mandarin in India. Citrus scab (Elsinoe fawcettii Bittan. & jenk) is an important disease prevalent  in most of the citrus growing countries particularly in U.S.A., Australia, New Zealand, Argentina, India, Ceylon and Pakistan. The disease affects the external appearance of the fruit and later on the fruit size is reduced. Emerging leaves and external surface of fruits are more susceptible to pustules and raised scabs. The external surface of the fruit is also badly effected due to the raised scab. The lesions produced on fruit are dark brown in color. Later on these lesions are converted into grayish color. Citrus scab is a major problem in citrus growing regions of Pakistan particularly in Punjab Province locally known as virus. The main locality in Punjab province is Sargodha district which is famous for citrus production all over the world. 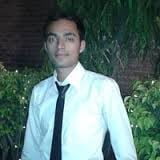 Muhammad Usman is student of University of Agriculture Faisalabad, and our regular contributor for articles and information. He can be contacted at   [email protected]