FANCA gene is responsible for the activation of DNA repair pathway. Due to genetic mutations, this gene could not work properly thus leading to the uncontrolled production of abnormal cells i.e. Cancer. This article presents how FANCA gene is involved in the early onset of Cancer.

Cancer is not a single, rather a group of diseases that involve abnormal growth of body cells. These abnormal cells are capable of invading or spreading to other parts as well. About 14.1 million people suffer from cancer each year. This deadly disease causes nearly 8.8 million deaths annually. In 2012, about 165,000 children under the age of 15 years were diagnosed with cancer. People in old age are more likely to suffer from cancer and the risk of this disease is increasing due to the changed lifestyle of developing countries. 90-95% of cancer types are caused by genetic mutations from the environmental factors while the remaining 5-10% are due to the inherited genetic disorders.

According to different researches, the genetic mutation in FANCA gene is found to be responsible for early onset of cancer.

Gene Mutation and its types:

Gene mutation refers to the change in the sequence of DNA that makes up a gene. This change is permanent and differs from the normal human beings’ DNA. There are different types of mutations, some may be at a single unit i.e. Nucleotide change, others are in 2 or more genes. The types of mutations include:

An insertion mutation involves the addition of DNA bases, which are not of suitable form and may not fit in. Such an insertion doesn’t let the protein made by the gene, to work properly.

A duplication mutation involves the duplication or multiplication of a nucleotide, number of times within a gene. It also alters the function of resultant protein.

Frameshift mutation involves the addition or loss of nucleotides in a way, that changes the reading frame shift of a gene. The reading frame consists of three consecutive bases, which code for a single amino acid. So, the mutation in the frame shift changes the sequence of these nucleotides leading to the change in the amino acid code. The resulting protein thus, becomes non-functional.

Missense mutation involves the change or substitution in a single nucleotide resulting in the shifting of one amino acid with another and altering the function of resultant protein.

A nonsense mutation also involves a change in a single nucleotide, but instead of completely replacing an amino acid with another, it simply signals to stop the formation of protein. Thus, this mutation leads to no protein at all.

The FANCA gene is involved in the Fanconi anemia (FA), a cell process pathway. It provides guidelines and instructions to make a protein. The FA pathway is activated only when the process of DNA replication gets blocked, due to damage in DNA. This pathway is primarily responsive to a specific type of DNA damage called Interstrand cross-links or (ICLs). ICLs occur, when 2 nucleotides on the opposite strands of DNA get linked abnormally, leading to stop the process of replication.

The FA core complex contains a group of proteins including FANCA protein, (FANCB, FANCC, FANCD1, FANCD2, FANCE, FANCF, FANCG, FANCI, FANCJ, FANCL, FANCM and FANCN), and two more proteins called Fanconi anemia-associated proteins (FAAPs). When DNA replication breaks down, this complex activates two proteins, namely FANCD2 and FANCI. It then attaches a single molecule of ubiquitin to these proteins by a process of monoubiquitination. These proteins then take the DNA repair proteins to the site of DNA damage, to fix the error and continue DNA replication.

Mutated FANCA gene is inherited in an autosomal recessive pattern, i.e. both the copies in daughter cells have mutations. The parents do not show any symptoms of disease since each of them carries a single copy of the mutated gene. The gene is located on X chromosome and is inherited in an X-linked recessive pattern. So, males carry a single X chromosome, and are more likely to have disease, while both mutated X linked genes should be available in females to cause the disorder. This is the reason that males are more likely to suffer from this disorder than females.

Mutations in the FANCA gene

About 450 types of mutations in the FANCA gene are found to be responsible for 60-70% of Fanconi anemia. Fanconi anemia is involved in the reduction of bone marrow function, early and increased risk of cancer and physical abnormalities. The mutations may be insertion or deletion in the FANCA gene. Some mutations lead to the formation of proteins with alternative or disruptive functions, others stop the production of FANCA protein completely. Mutations involved in the prevention of protein production cause shortage of blood cells i.e. Acute Myeloid Leukemia (AML) in the early age, and increase the risk of cancer formation in blood-forming cells. The cancers produced as a result, include tumors of the head, neck, skin, gastrointestinal system, or genital tract.

Mutations in the FANCA gene are responsible for the formation of nonfunctional FA core complex and disruption of FA pathway. As a result, DNA repair is not possible and ICLs start building. The ICLs stop DNA replication and result in the abnormal cell death or uncontrolled cell growth, due to the lack of DNA repair process. Fast dividing cells of the developing fetus and bone marrow are affected the most. The abnormal physical characteristics of Fanconi anemia appear, when blood cells start decreasing. These abnormalities include irregular skin coloring i.e. hypopig 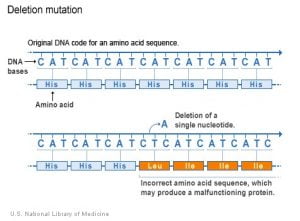 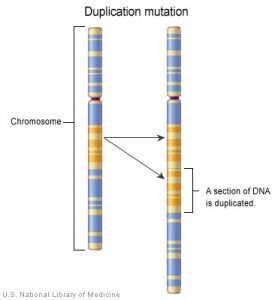 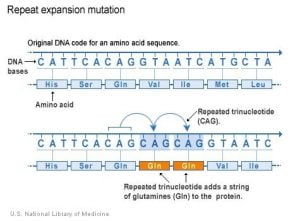 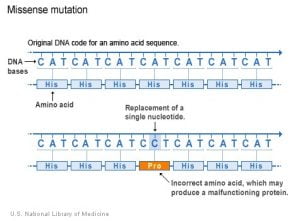 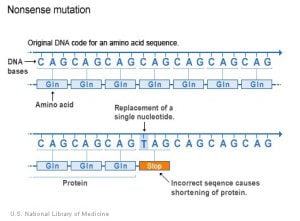 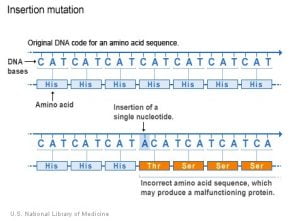 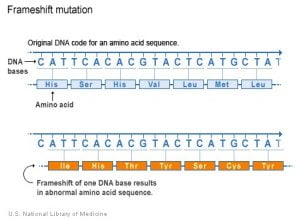 mentation or café-au-lait spots, which are dark patches of skin. Other symptoms include highly malformed thumbs or forearms and skeletal problems such as, short stature; malformed or absent kidneys and defects of the urinary tract; gastrointestinal abnormalities; heart defects; eye abnormalities such as small or abnormally shaped eyes; and malformed ears and hearing loss. People with this condition may have abnormal genitalia or malformations of the reproductive system. This is why, affected males and many females are infertile. Some additional researches show the abnormalities of the brain and spinal cord, including increased fluid in the center of the brain (hydrocephalus) or an unusually small head size (microcephaly).  As the problems in the DNA repair doesn’t fix, the uncontrolled cell growth leads to the development of Leukemia and other cancer types.