World population has a tremendous growth day by day and the current resources are continuously diminishing at a faster rate. Similar is the case with clean water availability. According to a study the people have more access to mobile phones as compared to clean drinking water. All is due to lack of management and unequal distribution of water resources that leads to unfavorable conditions particularly for the poor people. One study shows that human population can suffer from water shortage at the end of 2025. Nearly 70% of the total earth is covered by a huge amount of water. It would be an astonishing fact for all of us that out of 97% available water only 3% is available for drinking purposes. As the awareness about the environmental issues increases among the people, demand of fresh and clean water is also increasing day by day. Nearly 1.4 million deaths occur annually due to the consumption of contaminated water. The community of children is highly threatened by diseases. One out of five children expires due to waterborne diseases.

Diarrhea is the major disease which affects the children abruptly. Mortality rate in children due to contaminated water is greater than AIDS, measles, and malaria collectively. In every 20 second, one child expires due to this waterborne disease while mortality rate in infants is 60%.According to WHO 25-30% people are admitted in hospitals due to water borne diseases.

Chiniot is an old historic city and situated at almost at the center of the Punjab. River Chenab is flowing between the Chiniot District and Chenab Nagar. The boundaries of Tehsil Lalian, Bhoana and other towns are also attached to this river. These areas near the river basin are in a continuous threat of flood during moon-soon season.  All these areas are mostly flooded during this season. A large number of people are affected with waterborne diseases during this season. Hospital admission reports show that peoples are affecting at a faster rate in moon-soon than the normal days. Another havoc that has been disturbing and deteriorating the water quality of the river is addition of waste water from of the untreated industrial and sewage contaminated water into the river body. It increases the chemical as well as biological pollution level of the river. Nearly six districts in Punjab are throwing their untreated discharge into the river. There is a very serious threat to the aquatic life. A large number of fish has been observed died due to contaminated water.

The districts which are involved in throwing untreated discharge into the river are Gujrat, MandiBahauddin, Jhang, Multan, Hafizabad, Sargodha, and Chiniot.

According to sources, there are 15 points of waste discharge into the river contributing an increase in water pollution level due to the above mentioned districts.Two out of these 15 drains are in district Chiniot. i,e Marh drains and Paharang drain.  A very large area of the district is consuming the river water for drinking purposes.

From all above information about contamination of river water, it is concluded that clean and fresh drinking water becomes scarce in the district. Due to this shortage of clean water, the people ultimately have to consume contaminated water for drinking purposes. As a result, people of the whole district are suffering from water borne diseases. Another aspect of these infectious diseases is the poor sanitary conditions, the inter mixing of sewage and drinking water.

In Chenab Nagar, water quality analyses are conducted for both drinking and surface water. Results show that there is high contamination of E.Coli in drinking water which is an indicator of fecal contamination. It means that there is intermixing of water supply with sewage water. There is no proper drainage of sewage water in this city. Mostly, sewage water is ultimately thrown into streets which results in the mixing of this water into broken water supply pipelines.

Fazl-e-Omer hospital records show that a very high percentage of gastrointestinal diseases were observed in the local community. Especially the children under five are affected with diarrhea, cholera and legionellosis. Main source of these diseases is contaminated water and these are called waterborne diseases. Mortality rate in this age group(under five) is comparatively seen very high. Similarly the people of other age groups are also affected by waterborne diseases. Same conditions of poor sanitation are prevailing in whole district of Chiniot. 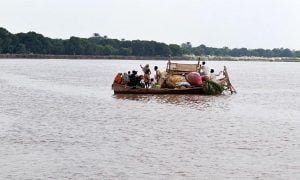