Forests are a gift of nature and have many benefits like they save us from floods. Reduce soil erosion, provide oxygen for our respiration, a source of recreation, cause rains and maintains weather of an area. In addition to all these benefits, forests are a source of climate change mitigation by taking up Carbon Dioxide in and using it for their food and release Oxygen, which we use for breathing.

“A single mature tree can absorb 48 lbs Carbon Di-oxide per year and give 260 lbs Oxygen per year. According to this analysis, forests can sequester around 4 billion tones of carbon per year of Carbon per year, based on current forest inventories”.But, this simple thing is being deteriorated by humans. As, population is increasing, the land clearing is done for agriculture and residential usage due to which forests are being removed.

In world, forests are being cut at the rate of 2.4 acres per second, 149 acres per minute and 214,000 acres per day and 78 million acres per year. Pakistan has the rate of deforestation 0.2-0.5% annually, which is the highest in the world and accounts for 4-6% decline in wood biomass per annum and the natural forest cover has been reduced from 3.59 million hectares to 3.32 million hectares at an average rate of 27,000 hectares annually.

After reading the above figure, one may say that the forests are being declined day by day and humans are creating their own source of havoc. We should plant the trees as they are the cheapest way to mitigate climate change and this education should be spread from grass root level and Govt. should also take some necessary steps for that. 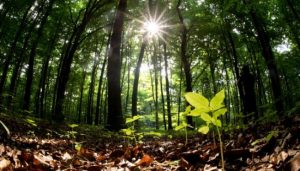