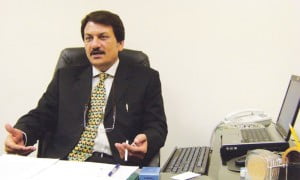 AFTER experiencing an overall drop of 12pc in its tractor sales to 12,416 units in 2014 because of a tough economic environment, plummeting commodity prices, floods and political agitation in the country, the Al-Ghazi Tractors Ltd witnessed an upturn in its sales during the first half of this year.

According to its unaudited accounts for the January-June period, the company sold 9,365 tractors, up 99pc from the 4,765 units it sold during the same period last year. As a result, it made a record pre-tax profit of Rs1.7bn in the period, which was double its last year’s comparable pre-tax earnings of Rs856m. Its market capitalisation soared to over Rs29bn and its stock price hit a peak of Rs548.9.

Al-Ghazi Tractors Ltd (AGTL), which has a production capacity of 30,000 tractors, plans to at least double its sales by the end of 2015.

“The tractor sales have been robust during the first six months of the year and we expect our sales volume to cross 18,000 units before the year closes,” said Shahid Hussain, the company’s CEO.

‘We need to mechanise our agriculture rapidly to sustain the growth in farm output and the profitability of farmers, as well as to increase our per-acre yield’

In its second quarterly report, the company attributed the spectacular growth in sales to the country’s improved economic fundamentals.

The future hopes of growth largely hinge on the timely implementation of the green tractor scheme of the Punjab government. Under the scheme announced in this fiscal’s budget, the Punjab government plans to distribute 25,000 subsidised tractors among farmers. The amount of subsidy has been fixed at Rs200,000 per unit.

The company’s annual report for 2014 blamed the ‘external factors beyond its control’ for its underperformance during the year and gave credit to better management and cost-cutting efforts for an 11pc improvement in its pre-tax profits to Rs2.25bn. Its earnings-per-share grew to Rs27 from Rs23.66. This was despite a drop in its sales to Rs8.8bn from Rs9.3bn in 2013.

The company said tractors sales remained anaemic during the year because of a lack of bank financing to cash-strapped farmers.

“The tractor industry’s growth in the country has been cyclic and largely depends on the performance of the agriculture sector, crop prices and disposal income available to the farmers,” argued Shahid. He is credited to have turned around General Tyres from a loss-making enterprise to a highly profitable and vibrant company during his six-and-a-half years as its CEO.

“The floods and depressed commodity prices have dented the disposable income of our farmers and this fact is reflected in the lower sales of tractors and other agricultural implements and equipment over the last few years,” he added.

Although agriculture contributes 21pc to GDP, the level of mechanisation in Pakistan remains one of the lowest in the region. The government has scant information on farm mechanisation in the country, but it is estimated that the area cultivated by farmers who own tractors is less than 10pc of the total cropped area of 6.6m hectares.

“We need to mechanise our agriculture rapidly to sustain the growth in farm output and the profitability of farmers, as well as to increase our per-acre yield,” said Shahid, who took over the company in August.

He supports the subsidised tractor schemes to help growers mechanise the agriculture sector, and underscores the need for launching similar schemes to encourage drip irrigation to save water and obtain higher crop yields.

“You cannot expect landless farmers and smallholders, who form almost 95pc of the people involved in agriculture, to purchase tractors and other agriculture equipment without help from the government. They do not have the capacity for that. Cooperative farming should also be encouraged for increasing the use of new technologies in the agricultural sector.”

Shahid is of the view that the implementation of the government’s policy initiatives to support small farmers and farm mechanisation can double tractor sales to around 90,000, rapidly increase per-acre crop yields and create new jobs.

However, he realises that the financial problems facing the government do not allow it to allocate more resources for subsidising farm mechanisation — at least not for the time being.

“We plan to improve our technology and quality in such a way that it does not impact our prices and our tractors remain affordable for the farmers. I have set the target of making AGTL the top tractor company and brand in the country in less than five years,” Shahid said.

Water Conservation in the Pakistan