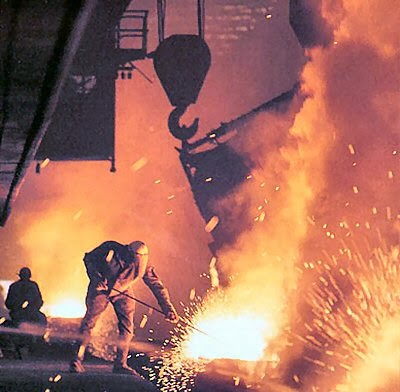 Ministry of Industries and Production (MoI&P) has submitted five proposals to the government to deal with the financial crisis of Pakistan Steel Mills (PSM), including restructuring, prior to its sell-off in one year, well-informed sources told Business Recorder. Secretary Industries and Production Shafat Naghmi had submitted a summary to the ECC in its last meeting but it was not approved as it did not carry the signature of Minister for Industries.

The summary available with Business Recorder reveals that on 21st August 2013, Ministry of Industries & Production submitted a summary to the ECC for providing financial assistance to PSM amounting to Rs 28.49 billion. The ECC advised MOI&P to “rework the requirements in consultation with stakeholders taking a holistic view and to present a revised plan before ECC”. In compliance thereof, a business plan was submitted to the ECC on 7th September 2013. The ECC approved Rs 2.9 billion for interim payment of salaries, clearance of critical liabilities and working capital.

During the months of November and December 2013, the Board of Directors of PSM held six emergency meetings to suggest policy choices to the Government for solving administrative, technical and financial problems. It also carried out extensive consultations with the steel market experts. This process not only reinforced the earlier analysis, it also identified more skeletons in the closet. Collectively, the following issues were identified that need immediate attention. Administrative Issues: Manpower is 16,000, which translates into 275 employees per MT as opposed to regional benchmark of 67 employees per MT. Out of 4,882 officers, 2446 “officers” are intermediate, matric or middle-pass. Average cost for staff is Rs 58,566 while average cost for officers is Rs 80,943.

PSM has a strong and vocal CBA, supported by different political groups. Attrition of suitably qualified people through retirement or otherwise, and appointment of people on nepotism has largely left PSM with non-qualified and unproductive workforce. Technical and Commercial Issues: Current production capacity is at 1.36%, while plant of this size needs to run at 80% capacity to be economically competitive. 30-year old plant requires significant rehabilitation costs to attain 80% capacity. Maintenance is critically overdue for thermal power plant, turbo blower station, blast furnaces, SMD boilers/ converters and rolling mills.

Cost of conversion per MT is Rs 4,000 as compared to the market average of Rs 1,000 per MT. PSM is almost out of the billet market and the same may also happen with HR and CR products. PSM”s competitiveness and sustainability is increasingly becoming doubtful due to exorbitantly high fixed costs including unproductive manpower. Financial Issues: accumulated liabilities stand at Rs 106 billion. Contingent liabilities are over Rs 18 billion. Loan defaults have occurred with all lenders & PSM appears as defaulter in CIB. A default of Rs 12 billion with SSGC has put assured gas supply at risk. Current Ratio is 0.22, and current liabilities are 3.6 times current assets. Debt: Equity Ratio is minus zero, making the capital structure untenable. PSM has no raw material inventories, nor does it have any working capital.

To date, GOP has given Rs 43.4 billion in small tranches as bailout packages since October 2009, which highlights the fallacy of giving funds in small morsels. Ministry of Industries & Production has taken certain initiatives to ameliorate the situation. However, this is a patchwork, not solutions. Solution to problems besetting PSM will require hardcore decisions. Some of these decisions will entail prohibitive financial cost, others high political cost. With this caveat, five policy choices are submitted.

Option 1: Status Quo: At this very moment, PSM does not have raw material or working capital and may lead to forced shutdown in a matter of weeks. The monthly costs estimated at Rs 2.35 billion for the next 12 months will add up to Rs 28.8 billion, against which PSM could possibly generate Rs 2 billion per annum from commercial utilisation of Jetty and coal conversion into coke on commercial basis. Present value of this annuity for 15 years at 12% interest rate is Rs 182.53 billion.

Expectations From GoP: Continuously support PSM”s monthly expenditure through quarterly payments. Where Does It Lead Us? In all probability, lenders will recall GOP guarantees of Rs 41 billion. There is a high probability of complete plant shutdown. PSM will be forced to incur ultimate winding up costs.

Option 2: Winding Up – Asset Sale: PSM should be immediately closed and its assets sold on as is where is basis. Expectations From GoP: Pay off Rs 82.77 billion against all liabilities after deduction of sale proceeds, which are estimated to generate Rs 33.39 billion. Where Does It Lead Us? Possible political cost and judicial review. The issue is settled once and for all.

Option 3: Attempt to Revive with No Decision on Privatization: This option is in consonance with anti-Privatization sentiments. Expectations From GoP: Immediate cash injection of Rs 19.1 billion Non-cash facilities of Rs 51.774 billion. VSS Package for 4,000 employees of Rs 14.17 billion.

Waiver of SSGC LP surcharge of Rs 6.560 billion on principal of Rs 12 billion. Resolution of all tax and tariff related issues especially with respect to sales and income tax exemptions on inputs.

Where Does It Lead Us? This option may lead to a temporary revival. However, accumulated losses will continue to pile up and by 2015, cash deficits will re-emerge. Deferment or moratorium of liabilities will come back to haunt PSM again, with continued high-risk exposure to GOP.

Option 4: Keep PSM Ticking and Privatise within 12 Months: This option suggests that PSM should be privatised in 12 months, and during this period, GOP provides piecemeal cash injection in line with the past practice. Expectations From GoP: Capital Cash Injection in instalments Rs 31,610 million, Financial Restructuring through parking of loans Rs 50,712 million, VSS Package for 4,000 employees 14,167 million, waiver of SSGC surcharge 6,560 million.

Where Does It Lead Us? – Incur further losses of over Rs 25 billion in 12 months in 2014. Current ratios will deteriorate further. There are no signs of a turnaround with further bleeding beyond 2014. Negative balance sheet will make it a difficult transaction to privatise. In the event of a failure to privatise, PSM and GoP will be back to square one.

Option 5: Restructure, Revive PSM and Privatise within 12 Months: This option aims to utilise the time between now and the final phase of Privatization to revive its activities. It also offers a chance to keep PSM in public sector if restructuring is done properly.

With re-structuring, Debt: Equity Ratio is gradually restored. This implies the ability to borrow funds eventually on its own without resorting to GOP. Current Ratio gradually improves and by 2018 current assets exceed current liabilities. Manpower rationalisation results in a saving of Rs 15.5 billion over seven years PSM will appear more attractive for Privatization. The summary says that depending upon the management”s capability and a qualified and capable workforce, PSM”s revival should be possible and it could stand on its own feet. GoP will then have a choice to either privatise PSM (as per this option) or retain it as a state-owned enterprise. Option 5 also appears to address the issues that have continually plagued PSM for the past several years and caused irreparable haemorrhaging to the exchequer. In addition to mitigating GOP”s high-risk exposure, Privatization should also bring in dividends in the form of economic efficiencies, better supply to the local industry and Privatization proceeds for GoP.