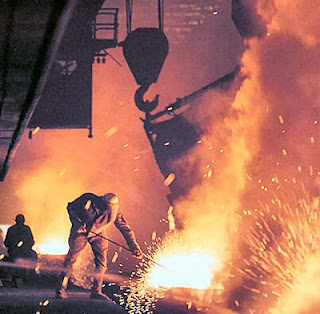 Minister for Industries and Production, Ghulam Murtza Jatoi has said that the government cannot inject Rs 40 billion to give a new lease of life to the Pakistan Steel Mills (PSM). “The PSM”s revitalisation requires Rs 40 billion but the government is not in a position to arrange this massive funding,” he said while talking to media after inaugurating a five-day workshop on energy here on Tuesday.

The PSM”s Board of Directors (BoD) has already constituted a three-member committee to formulate a privatisation plan, to be discussed in the next board meeting scheduled to be held next week. Official documents reveal that the GoP had recently informed the International Monetary Fund (IMF) that the government had appointed a professional board and secured a commercial credit line mostly from private banks to pay for interest on loans and raw material.

The Privatisation Commission and Cabinet Committee on Privatisation (CCoP) will fast track the decision-making process to approve a new comprehensive restructuring plan by the end of September with implementation to begin immediately thereafter. The government has, however, failed to meet the deadline given to the Fund. Sources close to acting CEO PSM told this scribe that the amount of outstanding of National Bank of Pakistan (NBP), consortium of banks and Sui Southern Gas Company Limited (SSGC) financial charges as on October 31, 2013, are as follows; (i) NBP financial charges and L/C default- mark-up and L/C default amounting to Rs 4.25 billion was due on October 31, 2013, but due to financial crunch these liabilities could not be paid to the NBP. The NBP reported non payment to the State Bank of Pakistan (SBP) for inclusion in ECIB; and (ii) Consortium of Banks- PSM has also defaulted on the first instalment amounting to Rs 610 million of principal amount of subordinated loan amounting to Rs 4,267 million which is being reported to ECIB; (iii) an amount of the SSGC outstanding bills up to September 2013 including late payment surcharge are as follows :- (a) principal amount of billing, Rs 11.587 billion; (b) late payment surcharge @2 per cent, Rs 6.207 billion. Total amount has been calculated at Rs 17.794 billion

“We have suggested that the GoP may arrange the payment of defaulted amount of Rs 4.2 billion to the NBP and Rs 3 billion additional L/C facilities be given by the NBP immediately, as comfort letter has already been issued by the MoF in favour of the NBP which is under dormant mode with the NBP. The GoP is requested to facilitate the PSM in obtaining L/C facility from the NBP for ordering a ship of coal and iron ore,” the sources continued.

The PSM has also proposed that L/C default of Rs 3.5 billion of the NBP be paid by the GoP and Rs 8 billion additional L/C facilities be given by the NBP immediately. The GoP has been requested to facilitate PSM in obtaining L/C facility from the NBP for ordering ship of coal and iron ore without loss of time because present loss per day is more than Rs 77 million. The PSM has proposed the following options to address the existing principal amount of the NBP loan of Rs 36.507 billion:

Option 1: loan of Rs 36.507 billion may be converted as the GoP equity. Option 2: loan may be converted into 8% cumulative preference shares to be issued to the NBP – 8% Cumulative preference shares means the PSM will pay 8% dividend on Rs 36.507 billion in case of profit. In case of loss, the amount of dividend will be accumulated in the books of the PSM and will be paid when profit is earned by the PSM. This will improve the balance sheet of the PSM by showing loan as equity of Rs 36.507 billion. However, the implementation of the proposal requires approval of Ministry of Finance and National Bank of Pakistan. Or

Option 3: If preference shares option is not acceptable to the NBP, the NBP commercial loan amounting to Rs 36.507 billion be converted into subordinated loan and interest cost be borne by the GoP. The principal amount of Rs 36.507 billion may be payable in 10 years after availing 4 years grace period starting from 1 October 2017. This will help improve net worth of PSM in relation to prudential regulation.

Consortium of Banks: The payment of this loan may be deferred for payment due to liquidity crunch of the PSM for three years. The MoF has already initiated case for the rescheduling of this loan which may be finalised at the earliest to avoid default. With regard to the SSGC dues, the PSM stated that surcharge of Rs 6.207 billion may be waived off and it may continue to be frozen till the PSM achieves 80% CAPU in the month of July 2014 given that the GoP has major ownership in the SSGC.

The principal amount of Rs 11.587 billion due against the PSM may be frozen till the PSM achieves 70% Capacity Utilisation (CAPU) in May 2014 (expected amount of Rs 2 billion will become due after adjusting payment of Rs 100 million per month). The projected principal amount due up to April 2014 amounting to Rs 14 billion will be paid by the PSM in 8 years as monthly instalment @ Rs 150 million starting from July 2014.