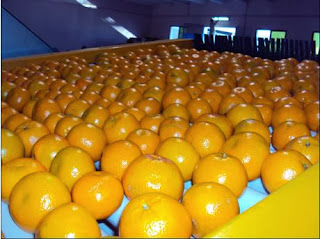 The ban imposed by Iran on the import of Pakistani Kinnow two years back, if not lifted immediately, may inflict a loss of $40 million in terms of revenue, according to All Pakistan Fruit & Vegetable Exporters, Importers and Merchants Association (PFVA) spokesman, Waheed Ahmed. Prior to the closure of Iranian market, Pakistan used to export 70 to 80 thousand tons of Kinnow to that country every year.

About the ban imposed by Russia on the import of fruits and vegetable from Pakistan, he said, hopefully it would be lifted by December 10. Negotiations in this regard are in advanced stage both at government and PFVA level and a decision in favour of Pakistan is likely to be taken soon, he added.

Pakistan exported 80 to 90 thousand tons of Kinnow worth around 56 million dollars until last year when suddenly Russian government announced a ban a few months back on the ground that the fruit did not meet the sanitary and phyto-sanitary requirements. A Russian delegation is likely to visit Pakistan in January next to examine as to how far quarantine requirements are being adhered to here so that export of ‘Aaloo’ from Pakistan could be allowed. The country could fetch a handsome amount of foreign exchange in case exports of ‘Aaloo’ are allowed by Russia, he said.

Waheed Ahmed said that PFVA has set 300,000 tones export target for Kinnow this year. The association had exported at least 235,000 tones Kinnow worth $140 million last year against the fixed target of 200,000 tones. He said that export of Kinnow will start by December 1. Production of the fruit is expected to be 2,100,000 tones this year against the previous figure of 1,800,000 tones. However the crop is likely to be damaged in some areas which may slightly affect the overall production.

Increase in the target by 100,000 tones this year has been estimated mainly because of an expected jump in exports to Russia and Indonesia. The export figure of 300,000 tonnes may even be crossed if the Iranian market is tapped followed by an expected relaxation in banking process after the improving relations between Iran and the US. He said that Pakistan would earn at least $180 million revenue if the targeted export of 300,000 tones Kinnow is met this year.

On the other hand, Waheed feared, the cost of exports is expected to increase by 15 to 20 percent due to hike in petroleum prices, impacting on the cost of transportation, logistic, packaging, labour and products. This would also create a stiff competition with rival countries producing the same fruit, in the international market. It was encouraging; he said that after signing preferential trade agreement with Indonesia, exports are expected to take a jump this year as it is a market of 40,000 tones after Russia and Iran.

Waheed has however linked the export target with favourable law and order situation in the country and close co-operation among exporters, shipping companies, quarantine department, customs and other concerned government organisations. Exports had suffered huge losses due to long strikes of goods transporters.