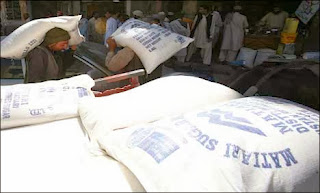 Pakistan Sugar Mills Association (PSMA) and Cane Commissioner Punjab have reportedly misled the federal government regarding sugar stocks in Punjab, giving an impression that current galloping hike in prices is not due to the shortage of commodity, well informed sources told Business Recorder.

On November 12, 2013, Cane Commissioner Punjab and PSMA informed a meeting of Sugar Advisory Board (SAB) presided over by Secretary Industries and Production, Shafqat Naghmi that stock with Punjab stood at 748,162 MT till November 6, 2013 which was far higher than the actual stocks available with the mills. An Islamabad-based sugar sector insider told Business Recorder on Wednesday that sugar stock with the Punjab stood at 260,000 MT on October 31, 2013, expressing surprise over a misstatement by the Cane Commissioner with the backing of PSMA and Association member sitting in the meeting, who did not challenge the exaggerated data.

Official documents available with Business Recorder revealed the SAB meeting was apprised that total sugar stocks stood at 923,950 MT as of November 4, 7 and 4 in Punjab, Sindh and KPK, respectively. However, sugar sector insider claims that if 500,000 MT of overstated stock is excluded from the total, it stands at 423,950 MT. An official of Industries Ministry told this scribe on Tuesday that total sugar stocks stood at 882,000 MT and sufficient till January 25, 2013 @ 3,90,000 MT per month.

Contrary to the claims of Federal Government, PSMA President Punjab Riaz Qadeer Butt told this scribe on November 12, 2013 that only 27,000 MT of sugar has been exported so far. The meeting was also apprised that Rs 216.95 million was to be paid to sugarcane growers from sugar millers for season 2012-13, out of which Rs 216.78 million ( 99.92 percent) has been paid so far. Mill owners still have to pay Rs 170 million to the growers of which Rs 90 million is against Punjab-based mills and Rs 80 million is against Sindh -based mills. Sugar mills based in KPK have cleared growers” dues.

Officials in the Industries Ministry and one of the top PSMA office bearers have also acknowledged that sugar millers usually float black stocks( not mentioned in the books) in the market and pocket substantial amount from undeclared stocks. However, the PSMA office-bearer was of the view that black stocks are floated during the initial days of crushing season and presently actual sugar figures are mentioned. This is the first time when an office-bearer of PSMA acknowledged that the undeclared stocks are being sold in the market. Last year, FBR had appointed inspectors at mills to examine stocks and the practice to continue this year.