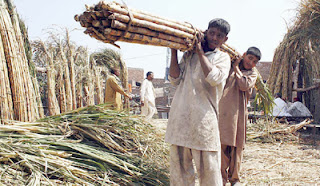 Expressing voice concern over delaying in fixation sugarcane prices for this year, dozens of growers staged a protest demonstration on main Sher Shah Suri Road near Press Club here on Monday, demanding the government to fix prices as per growing ratio of price-hike in the country.

The protest demonstration was spearheaded by Kisan Council District Peshawar, Arbab Mohammad Jamil, along with dozens of sugar cane growers. The protesting farmers were carrying placards and banner, inscribed slogans in favour of their demands, and against the Khyber-Pakhtunkhwa government. The protesters marched from Peshawar Press Club to Jinnah Park on main Trunk Road, where they staged a sit-in against the provincial government.

Talking to reporters, Arbab Jamil said the provincial government is using delaying tactics in announcement of sugar cane prices for the next season, which is sheer injustice with the poor farmers. He demanded the prices should be fixed at Rs 300 per/40 kilogram for this current year. The growers’ leader said the arrangement should be made to export ‘Gur’ (raw form of sweet) to foreign countries, especially Middle East and Central Asian States. For this purpose, he urged the authorities to proper guide farmers and facilitation for them to export Gur to other countries.

Kisan Council demanded the government to lift ban on export of poplar wood to neighbouring Afghanistan and to restore the irrigation system through ‘civil canal’ in Duadzai an area of outskirt of Peshawar, Khyber-Pakhtunkhwa. The growers warned if the government failed to accept their demands forthwith, then they would compel on self-immolation in front of Chief Minister House.