Food is the indispensable requirement of all living wages as such food security is fundamental for the health of a nation, additional for its independence and honorable living among the community of nations in the whole world. But regrettably, plenty quantity of reasonable, nourishing food is not available for almost 800 million peoples in the world. This is because of the fact that globally 1.3 billion tons food wasted per year.

In Pakistan wheat is the staple food for the greater part of our population and our country is the eighth leading producer of wheat in the world. Wheat provides us 72 percent calories and protein in an average diet when a human being consumes 120kg wheat in a year and it is maximum in the world. Wheat contributes 13.8 per cent to the value-added in agriculture and 3.2 percent to the GDP. But a reasonable quantity of wheat becomes useless due to post harvest losses. The post harvest losses of stored grain in Pakistan are 10-14%.In Pakistan the post harvest losses of wheat are up to 10%. Similarly, in India, the storage losses of wheat due to infestation of insect pest are 2.03%, 0.2% at national reserve level and 7-13% in china.

The Khapra Beetle(Trogoderma granarium Evarts.), is one of the world’s most destructive  pests of  all stored grain products like cereals, wheat, maize, corn, barley, grams oilseeds, maltings, copra and other foodstuffs. It has been documented as an A2 quarantine organism in the whole world. This is inhabitant to India but this insect prefers hot and dry climates of other continents like Asia, Africa and Eurasia. By itsgreedy feeding and heating of grains, this pets cause massive losses in stored grains and thus has a great economic importance.  It is a primary pest and it feeds directly on grains at its larval stage.

The red flour beetle (Tribolium castaneum Herbts.),is a secondary insect pest of processed and damaged grains and is an important pest of  stored grain products in the whole world as it is observed on numerous commodities and cause qualitative degradation. The larva of the red flour beetle in negatively photo tactic and all the time found in buried places in food commodities.T.castaneumpopulation increases at a very high rate due to this it is not effectively controlled and thus it may cause significant economical losses.

Scientists used different methods and techniques to diminish the post harvest losses of food commodities in the world. The most commonly used method is the use of synthetic chemicals like Aluminium phosphide and methyl bromide and synthetic insecticides like cypermethrin, spinocid and eldrin. These fumigants and synthetic insecticides has a rapid effect on the insect pest and shows excellent results abut they have some drawbacks as they are detrimental to the environment and cause much pollute to the ecosystem. Due to the repeated action of this insecticide, genetic mutation occurs in insect pest and thus they become resistant against them. Insecticides have poisoned and toxic chemicals in them which is more risky to the human health as their residues remain in air and thus cause in breathing. Most of the beneficial insects and non targeted insects are also killed due to these poisoned insecticides. In order to decrease these hazards we should use safe and friendly approaches like bio chemicals, biological control method and use of elements like Ozone.

Ozone is a gas that is present naturally in the atmosphere. Chemical formula of the ozone is O3 because three oxygen atoms are present in an ozone molecule .On the basis of presence of Ozone, the atmosphere is divided into two regions, troposphere and stratosphere. The troposphere is the closest region from the earth (10- 16 kilometers from the earth surface) and about 10% of the atmospheric ozone is present in this zone. Similarly the stratosphere is 50 kilometers altitude and about 90 % of the ozone is present in this region. Ozone was firstly produced in the laboratory by the European researcher C. F. Schonbein in 1839.  Ozone was firstly used commercially in 1907 in municipal water supply treatment in Nice and in 1910 in St. Petersburg the general ozone generation. In order to produce ozone molecule, firstly we split the diatomic oxygen. The resulting free radical oxygen reacts with diatomic oxygen to form the tri-atomic ozone molecule. Nevertheless, in order to break the bond between two oxygen atoms we should require a huge amount of energy.  To initiate free radical oxygen formation ultraviolet radiation (188nm wavelength) and corona discharge methods can be use and then ozone is produced. While at commercial levels the ozone is produced by corona discharge method. In corona discharge, high tension electrode and low tension electrode (ground electrode) is present and are separated by a ceramic dielectric medium and narrow discharge gap. 1–3% ozone can be produced when the air is passed through it as a feed gas

Ozonation is a new process of storing food instead of phosphine and methyl bromide chemical tablets which are very toxic and carcinogenic. Due to this new process 18 percent losses of food products can be avoided which are damaged by pathogenic organisms. Ozone has also becterialcidal effect against both gram positive and gram negative bacteria. Experiments revealed that ozone has a maximum efficacy agaist food related micro-organisms as it effects on the bacterial membrane glycoproteins. Ozonated water is used in dairy and food plants due to which the chlorine treated water hazards becomes minimum. Ozone is also used in stored grain products like wheat, corn and rice to control the attack of insect pest and by the using of ozonation 60% cost is saved. Ozonation reduces the pollution  which is caused by the chemicals like phosphine as if 4 tablets of phosphine are necessary to store one ton of grains then in Mexico 22 million ton wheat is produced and for this 88 million piss are necessary which in return gives us a plenty amount of pollution. So by using ozone instead of phosphine we can save the environment.

In 1893 ozone is firstly used as a disinfectant in drinking water, it is used as a food preservative for the cold storage of meats since 1909, and was found to avert the growth of yeast and mold during the storage of fruits in 1939. Ozone is also a broad-spectrum biocide against fungi, bacteria,  viruses, bio films and protozoa and no one in these micro organisms has  the ability to get tolerance against it because ozone cause damage by the oxidation process.

Ozone is dissolved in water by the bubbling process and thus this ozonated water cause much mortality of microbe and gives more than 90% mortality of bacteria in vegetables, 0.10 ppm concentration increase the shelf life of beef carcasses up to 40%.similarly by using this ozonation method the fish can remain in its healthy condition for 14 days. Ozone has also a mortal effect on both internal and external feeders of stored grain species and thus recently it is used widely to control insect pest of stored grain pest. Cryptolestes ferrugineus, Oryzaephilus surinamensis, T. castaneum, T. confusum and Stegobium paniceum are the external feeders and weevils such as Sitophilus, the lesser grain borer, Rhyzopertha dominica and Angoumois grain moth, Sitotroga cerealella are the external feeders. Experimental results showed that the larval, pupa and adult stages are more susceptible to ozone and it has a lethal effect on it so that it is an excellent method to control the insect pest of stored grains. For the larval stage the dose and exposure times cause 100 % mortality for all stages of larva of stored grain insect pest. These species are susceptible to the ozone because it is short lived, unstable and cause the damage to the insect by oxidation method. 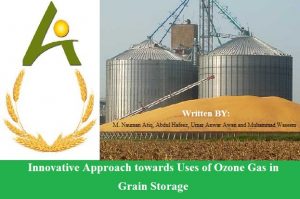