Currently World population has been estimated to stand 9·1 billion by 2050 that will need up to 70% more food production. This demand can be full fill by minimizing the post-harvest food losses that is 47% of the whole of the world and 24% is a part of cereals every year.

Today a variety of operations are used to decrease these grain losses, including two common techniques one is use of chemicals and second is controlled atmosphere (CA) storage that is more reliable and have not hazards on human health. Those Insect pests which are resistant to many chemicals can also be controlled by altering their prevailing environmental conditions.

Currently hundreds of chemicals are being used for the control of insect pests of stored grains but these chemicals are causing very serious health hazards not only for human but also very harmful for other mammals. Its residuals are reported in much of the food commodities which is a great hurdle in food security. They give very acute results but there cannot compromise on human health.

Previously many of the fumigants were being used such as methyl bromide and phosphine tablets especially against red flour beetle (Tribolium castaneum) and khapra beetle (Trogoderma granarium) but in 2005, Montreal Protocol banned on methyl bromide uses because it reported in depletion of ozone layer that is very dangerous for all lives. So all chemicals those take part in ozone depletion strictly banned throughout the world for the protection of this layer. After this, phosphine became most important fumigant in grain storage industry. It is highly toxic gas and can kill whole population of insect pests of storage without effecting grain quality because it leaves very minute residue on food commodities. Other advantage is that it is very easy in use for all types of storage containers and available even in small markets. But now due to fair in use it caused very serious problem in its performance. Much of the insect species have been reported that become resistant to phosphine gas and it is also not killed immature stages eggs and pupa are tolerant and can survive even under high concentration.

However, a variety of entomopathogens such as fungi (B. bassiana, M. anisopliae and Isaria farinosa), nematodes (Heterorhabditidae and Steinernematidae) and bacteria (Bacillus thuringiensis and B. sphaericus) were also applied for the protection of grains but they are very slow in reactions and causing non-targeted results. Numerous of antifeedants, oil extracts and diatomaceous earths, were also used that takes more time in results and have very minute penetration capacity. So due to all these issues, now researchers moves on second control strategy instead of chemicals and entomopathogenic control.

Temperature ranges 4°C-35°C and humidity below 12% are the most important basic factors for direct control of insect pests of stored grain but these are not enough separately and not easy to manage at a large scale storage so we must apply other strategies that should have acute effects and easy to handle at indutrial scale. To overcome this, agricultural engineers developed a new application of different gases such as carbon dioxide, nitrogen and ozone, are being used as fumigants at high pressure for potential control due to internal tissues damage.

Carbon is a very powerful element which has tendency to make oxides (carbon monoxide and carbon dioxide) when it meets with oxygen. CO2 is a most reactive oxidant than ozone and nitrogen that can be effective in both aerobic and anaerobic conditions as gamma radiations are for the reduction of both insects and bacteria in grains. It is also used as marker in metabolic reactions because it consist only 0.039% (390ppm) of natural air. 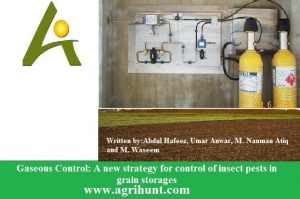 Use of Carbon Dioxide:

Carbon dioxide can be used with controlled atmosphere storage to eliminate insect pests in storages. 95% population of stored grain insect pests can be killed if its concentration is 6% and temperature will be 27OC for 4 days exposure, however, they can be completely killed by longer exposure. First time In 1979, Banks suggested for complete insect reduction with an initial concentration of CO2 exceeds 70 percent and above 35 percent maintained for ten days. Canadian Grain Commission calculated different times of exposure with respect to different temperatures at constant concentration level of CO2. If CO2 concentration level maintained at 60% then temperature and exposure days fluctuate as well. Temperature with 400C requires only one day of exposure, 250C, 200C and 100C require 5 days, 14 days and 58 days respectively. These temperatures and exposure days are for all stages of insect pests of storage.

CO2 have many advantages over phosphine and methyl bromide fumigants because it is highly inflammable, although, it is used in fire burghead equipments. Methyl bromide is strictly banned because its chemical residuals were found on food commodities and deplete the Ozone layer but CO2 have no such properties because it is not leach into the food commodities and used with friendly atmospheric conditions. Many stored grain insect pests have resistant against phosphine and methyl bromide but CO2 have no such case. Likely, plant extracts and other volatiles of plant origins are non-polar in nature and insoluble in water that will need large scale demonstration for their penetration capacity.

CO2 has 30 to 40 times more diffusion capacity in a bulk of grain and does not need any kind of solvent. In addition, CO2 is not for specific insects and particular kind of commodity but existing chemicals and other antifeedants are very special for a specific group of insects or for special situation.

In other words, use of altered atmospheric conditions and different gasses are the global need to get rid from existing chemical system which spoil our health and environment.