Food is the basic necessity for every living organism without which one can’t survive, but unfortunately, sufficient quantity of affordable, nutritious food is not available for almost 800 million peoples. This is only due to losses of food at post-harvest level according to an estimate about 47 % food is not consumable for human beings due to losses at post-harvest level.

Khapra beetle ( Trogoderma granarium everts) is one of serious threat causing insect at storage level not only in Pakistan but throughout the world it is a primary pest that directly feeds on wheat or cereals grains most damage causing stage of T.granarium is grubs that feed on it.

Red flour beetle (Tribolium castaneum) it is a secondary pest and detoritae wide range of food stuff like grain, flour, peas, nuts, dried fruits. It causes extensive losses due to its high potential for reproduction. It as secondary pest, therefore, it feeds on left over by T.granarium.

Different techniques have been used by different scientist to minimize the losses at post-harvest level. One of most often observed is use of synthetic chemicals like methyl bromide , Sulphuryl fluoride, and some other fumigants are regularly used by scientist at storage places no doubt these synthetic pesticides are very effective in controlling insect pest but these pesticides and fumigants have many drawbacks like continuous use of the same group of insecticide results in resistance in different strains of insects, they also effect human due to their long and persistent residual toxicity, these fumigants are also responsible for ozone depletion. When we think towards safe approaches for control of insect pest then two main approaches are mainly used one is the use of biological control like predator and parasitoids second is use of insect pathogen like fungi, bacteria, protozoa etc.

Entomopathogenic fungi are one of the best alternatives for synthetic pesticides. Mode of action of these fungi is that conidia of fungus penetrate in insect cuticle and start growing their which result in disruption of insect body normal function and lead insect ultimately toward death .One of the most prominent pathogenic fungi is Metarhizium anisopliae (Metchnikoff).It is discovered by Metchnikoff about 125 years ago. This fungus has a wide range of host this fungus has no residual effect it is easily removed at the time of milling. It has low mammalian toxicity. Its formulation can be easily prepared in a laboratory. Mainly two main types of formulations are used. Conidial suspension and Conidial powder. The conidial suspension provides 100 % mortality while conidial powder provides 96 %in R.dominica. While in T.castaneum case only conidial powder is effective while the conidial suspension has no effect on mortality of T.castaneum. This shows that different pest has a different affinity toward a different type of formulations.

Conidial suspension is prepared by mixing conidia into 0.2% sterile solution of tween 80 on deionized water. Conidia is filtered into glass beaker through cheese cloth and mixed with sterile spatula until homogeneity. Conidial suspension of 1×108, 1.5×108 and 2x108spores per ml prepared by serial dilutions and concentration is verified by a haemocytometer counts under microscope.

One of main advantage in use of Metarhizium anisopliae is that this experiment is completed in very short period of time data is taken after 7, 14 and 21 days and results are checked.

One of very prominent advantage for use for Entomopathogenic fungi over biological control agents that these fungal are contact based insecticide when insect body come contact with this fungus it at once starts infesting insect body and penetrate in insect’s cuticle. Moreover, this fungus has granted registration by the U.S. Environmental Protection Agency to be used against insect pests. 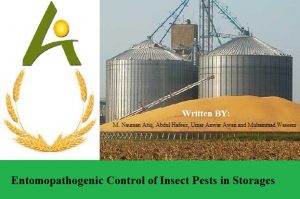