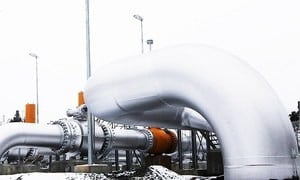 The government of Punjab is purchasing for its 1,200MW regasified liquefied natural gas (RLNG) plant at Bhikki gas turbines which neither exist nor are field-tested or have proven efficiency levels. The machines are yet to be designed and developed by the manufacturer.

Experts are of the opinion that in such circumstances the entire calculations about plant efficiency, tariff determination, EPC (engineering, procurement and construction) cost and its ranking against other machines become suspect. “It is tantamount to turning Pakistan into a test lab for these new machines,” they insist.

Work on the project was formally opened by the prime minister last week.

The government concedes the risk, but defends its decision and says it has chosen a globally reputed manufacturer and has sought from it additional guarantees and warranties to mitigate the inherent risk involved in new technologies.

Critics are not convinced because the manufacturer has quoted “unprecedented efficiency levels in order to win the order for machines that are becoming hard to sell around the world and, the Punjab government, for whatever reasons, has accepted the manufacturer’s data at its face value and would run the risk of its calculations falling apart subsequently”.

“The mere definition of proven technology, as quoted in the bidding document, makes the entire process doubtful,” explains a former official of Wapda’s Central Contract Cell.

The document says the manufacturer should have “eight units firm orders, of which three shall be shipped in 2016 or earlier”.

Where this magic figure of eight orders came from or, similarly, three units to be shipped in 2016, or earlier? Don’t both these conditions sound like tailored for a particular manufacture? If they do, they render the entire process “collusionary and illusionary”. Collusionary for the reasons of being tailored to the requirements of one bidder and illusionary because unprecedented and unverified efficiency data has been accepted and used for all subsequent calculations to award the orders, he insists.

A detailed questionnaire has been sent to the Quaid-i-Azam Thermal Power (QATP), builder of the Bhikki plant, highlighting all these issues, but it is only content to reproduce the manufacturer’s data in support of its decision. When pressed with counter-questions seeking precise answers rather than data, it refused to respond.

Musadaik Malik, spokesman for the prime minister, was more forthcoming: “The 9HA.01 is new technology and such new ventures always involve some kind of risk. These objections were raised during the bidding process as well, and the competitor bidders were called in to contradict efficiency claims of this particular manufacturer, but they failed.”

He said the choice before the government was clear: either go for new technology which was more efficient and cheap or opt for proven one with high price. The government decided for the former.

“As an additional measure, the government also checked with eight prospective buyers through its embassies and all of them confirmed the orders,” Mr Malik claimed.

But the critics refuse to relent. Why competitive bidders should be involved in proving or contradicting one of the manufacturers’ efficiency and generation claims, wonders NTDC’s former general manager who was involved in the earlier procurement process.

Independent labs have been developed around the world for this purpose. Why not go to them? The manufacturer or purchaser could not go to them because the machines don’t exist. They are cheap because of risk premium.

The manufacturer has to install them somewhere in the world to develop its market share and the purchaser (Punjab in this case) has taken the risk. It is not only the technology, but the EPC contractors selection was also a matter of controversy. The bidding document did not seek “operational experience” of the contractor.

A contractor might have built a plant, but whether it is running to the satisfaction of the builder or not? After all, the Nandipur plant is all built, but not generating anything. It only doubled the risk; untested technology, with inexperienced contractor, the former NTDC general manager said.

On its part, the QATP thinks that it does not need operational experience of the EPC contractor.