When chemicals were first introduced in farming, everyone marveled at what they could do. Yields were dramatically increased. In the beginning, the soil was so healthy, any damage done by chemical fertilizers was imperceptible, and pests had yet to evolve resistance to the insecticides. Our technologies were exported around the world as a revolution in agriculture – the green revolution.
Chemical fertilizers, insecticides, herbicides, antibiotics, hormones, factory farms, and genetically modified organisms, or GMOs. It just keeps coming. Almost no one calls it the green revolution anymore because there is nothing green about it, at least not in the modern ecologically friendly meaning of the word green. 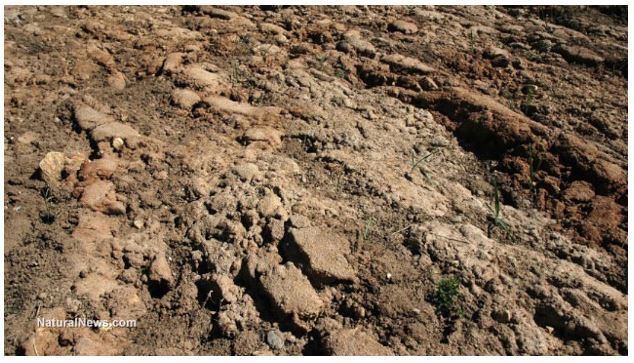 Downsides to the Green Revolution

There are a number of problems brought on by conventional agriculture’s techniques. Conventional methods are inhumane to animals; they spread disease and pollution and degrade our nation’s soil and water. In the interests of sustainability, protecting our nation’s resources and improving our health, conventional agriculture needs to be banned, both in the U.S. and abroad.
A return to organic agriculture, which prohibits the use of chemicals and encourages crop rotation, will protect our nation’s arable land, increase the nutritional value of our food, and dramatically reduce our food toxicity.
Toxic Food

Yes, our food is toxic when grown by conventional means. Ninety-three percent of Americans tested by the CDC had metabolites of chlorpyrifos, a neurotoxin in their urine. Chlorpyrifos has been banned for use in homes because it has been linked to autoimmune diseases and neurological damage, but it is still commonly used on golf courses and in bait containers, and it is sprayed all over our food.
Over 99% of Americans tested, tested positive for exposure to DDT. DDT has been banned from use in the U.S. since 1972. But it’s still perfectly legal to manufacture it in the U.S. ship it to Mexico and other countries, and then have it sprayed on food, and then sell the food to the U.S. DDT has been linked to various cancers and birth defects. It is a persistent toxin that stays in the environment for an extended period of time.
The government sets limits on how much of each pesticide can be on our food, but there is no limit to the number of different approved pesticides that can be on our food or the total amount of chemical contamination. The Pesticide Action Network tells us that Americans are exposed to an average of 10-13 pesticides every day.
As a last resort, organic farmers do use pesticides; however, organic farmers use pesticides that are plant based. These bio-chemicals naturally, quickly decompose. In contrast, conventional agriculture uses a vast array of chemicals, most of them synthetic. There are over 600 pesticides used in the United States. Many of these chemicals are known to last for hundreds or thousands of years before breaking down, and they are toxic to both humans and animals. The degree of exposure to these chemicals directly affects one’s risk of developing numerous cancers, especially cancer of the brain, prostate cancer, leukemia, and lymphoma.
If growing nutrient deficient, chemical laden food isn’t bad enough, conventional agriculture has gone even further by genetically modifying our food to make it easier to grow at an even higher cost to the consumer’s health. Many genetically modified foods are modified to produce pesticides within the plant. GMOs radically alter the microorganisms in the soil, damaging the soil’s fertility. GMOs introduce new allergens, new toxins, and unknown proteins into our bodies.
“Every day we make life or death decisions, decisions about what we eat. This may sound melodramatic, but it’s true.”

Studies have repeatedly shown that the nutritional content of organic food is dramatically superior to the nutritional content of conventionally grown food. Before the advent of today’s conventional agriculture, our food contained more nutrients. Organic agriculture’s predominant strategy is to cultivate nutrient rich soil. In order to add nutrients back into the soil, organic agriculture uses crop rotation and natural fertilizers. This produces healthy plants, which makes for healthy food.
What About the Soil

We must protect our nation’s arable land in order to protect our food supply for future generations. With approximately 18% to 19% of America’s land being arable, we have the world’s most abundant farming resources. Even though agriculturally viable resources are obviously of great economic value to the entire nation, our nation’s soil is treated as though it were disposable. Pesticides, herbicides, fungicides, and petroleum-based fertilizers strip the soil of nutrients and kill beneficial organisms such as earthworms, predatory insects, and microorganisms. In order to grow anything in such chemical laden soil, more chemicals are added. This process degrades the topsoil and causes salts to build up in the land, leaving barren dirt. After this process strips the land of its agricultural viability, conventional agribusiness moves on, acquiring more farmland. Then the process is repeated, rendering more land barren. By comparison, organic farming replenishes the soil through crop rotation, natural fertilizers, and the use of time-honored, natural techniques.
Deadly Germs

A whopping 50% of antibiotic use is not for human beings but for livestock. The media is constantly warning about the dangers of overuse of antibiotics. The concern is that overuse (and abuse) of antibiotics can breed antibiotic-resistant bacteria.
It is commonplace to add antibiotics to livestock feed, even when the animals aren’t sick. This is because conventional methods typically overcrowd the animals so badly that too many of them will get sick without an on-going diet that includes antibiotics.
It is cruel and inhumane to force animals to live with their own waste and in such crowded conditions. To keep consumers in the dark about the realities of factory farming, many states are passing laws forbidding filming inside these factory farms. The stench of these crowded pens is unbearable to any but the most stalwart and habituated individuals, and the animals’ waste is so concentrated that it poses a risk to nearby natural water sources.
These are perfect conditions for pathogens to thrive. It provides bacteria with the opportunity for many different food sources, and many different animal hosts to infect. This gives bacteria an opportunity to develop resistance to our medications. These conditions are also ideal for viruses to spread from animal to animal and potentially to humans.
Dead Zones

Conventional farming utilizes phosphorous and nitrogen chemical fertilizers. When rain and runoff carry these fertilizers into the ocean, marine life is suffocated. The fertilizers trigger overgrowth of marine plankton. Once the masses of plankton die, their death feeds ocean bacteria. The bacteria consume oxygen, and with an unnatural overabundance of plankton, the bacteria consume just about all of the oxygen left in the ocean. Shrimp, fish, and all other forms of marine life either leave the area or die from lack of oxygen. The end result is hypoxia, oceanic dead zones. These areas are devoid of nearly all life other than plankton and bacteria.
Scientists have documented coastal dead zones, areas that are hypoxic in over 400 coastal areas. All over the world, these dead zones are found downstream of conventional farming from Chesapeake Bay to Oregon to Denmark, and to the Black Sea.
We have a vested interest in marine life. It is not only shameful that marine animals suffocate as a side effect of our farming pollution, it is also economically damaging. The ocean provides us with billions of dollars worth of food annually. Nothing of commercial importance survives a dead zone, fish, shellfish, and shrimp all either leave the area or suffocate in the dead waters. Many of these dead zones are thousands of square miles. The dead zone off of the Gulf of Mexico was once recorded as being an area larger than the state of New Jersey, 22,000 kilometers.
Conclusion

Pesticide residue, antibiotics, preservatives, and genetic modification directly affect the long-term sustainability of farming, fishing, the consumer’s health, and the health of those who grow and produce the food. We do not exist separately from the environment in which we live. If what we consume is polluted, our bodies become polluted. Beyond choosing what we buy in the store, we as a nation must choose, for the long term or short term, organic or conventional. This choice affects us all, even those not yet born.