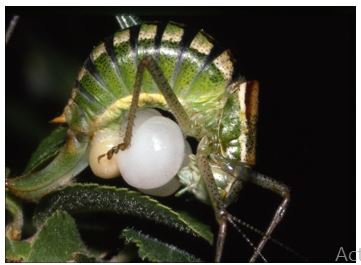 Wedding gifts in humans involved diamond rings for the girls and showing the different beautiful things to boys. These gifts are given from both sides to increase the love. These gifts are also given by the animals these are called the nuptial gifts these are found in many groups of arthropod.

Several gifts have independently given by the insects to each other in the form of different things. Different taxa of insects i.e. hanging flies, Dance flies, Bushcrickets, crickets, scorpion flies, butterflies and beetles give the different nuptial gifts.

Dance flies give various types’ nuptial gifts ranging from the nutritional gifts they also gives the leaves or small twigs. Dance flies wrapped these gifts sometime in silken thread called as nuptial balloons. Males of dance flies give the empty silk balloons to the female in the form of small bubbles. Balloon size is the indicator of male health and chance given by the female. While the female preferred the male having medium size balloon and large body size.

In case of Bushcrickets males attached the large spermatophore to the genitalia of female during the mating. Sperm are mostly not present in this mass called as gelatinous mass. This nutritional mass is consumed by the female, enhancing the egg laying capacity of females and increases the offspring fitness.

In scorpion flies males uses the three different tactics for mating with the female’s i.e. salivary secretion, prey gifts and sometime free of cost mating. But in case of starved males they feed extensively on prey before the female. Females feed on saliva of the male increases the egg production in females and increase the health of males.