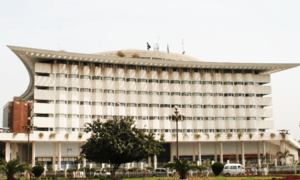 The Water and Power Development Authority has blamed late approval of revised PC-I and squeezed flow of funds as major reasons for delays in execution of the 969MW Neelum-Jhelum Hydel Project.

Wapda took the stance in response to a letter from the prime minister in which he expressed fears that the speed of execution and uncontrolled seepage at tunnels could delay the project by two years and spoil it entirely.

“This project has been unique in the sense that 74 per cent of it has already been completed without the financial close,” said Wapda in its response.

Although the contractor was bound to follow the timeline, timely completion depends largely on flow of funds.

“The problem was brought to the notice of the prime minister when he visited the project. The PM directed the Finance Minister to streamline finances for the project. Under the directions of the Finance Minister, the board of directors of the Neelum-Jhelum Hydropower Company approved the revised PC-I amounting to Rs414 billion. It was submitted to the Ministry of Water and Power on March 30, 2015. The ministry cleared the revised PC-I on May 22, 2015 and sent it to the Planning Commission. After going through the pre-CDWP (central development working party) and CDWP meeting on October 29, Wapda was told that Planning Commission would further re-check the figures and then the revised PC-I would be sent to the Executive Committee of the National Economic Council (Ecnec).” The approval is awaited.

“The main problem is that the contractor cannot follow the strict timeline without the availability of funds. Wapda obtained the term-sheet for Rs100bn loan from a banking consortium but it would only process the loan application when it gets revised PC-I approved by Ecnec. Similarly, for arranging foreign exchange component, the Exim Bank of China is willing to entertain loan amounting to $575 million but it also requires the Ecnec approval of the revised PC-I,” it adds.

A panel of experts recently visited the project and termed progress and quality of work satisfactory, but “timely completion of the project is dependent upon arrangement of necessary funding”.

In internal correspondence, the chief executive of the NJHP retired Lt-Gen Mohammad Zubair, who has been on notice period for quite some time before quitting the job, had also complained about non-availability of funds.

“As of today, the project is still being financed on day-to-day basis and the government was still far off from achieving financial close of the project even at this critical juncture. After the visit of the Prime Minister on June 19, 2013, a Best Efforts Plan (for accelerated construction) was chalked out and agreed upon by the contractor and the client on July 18, 2013, which had two essentials: clearance of outstanding payments of $150m by August 1, 2014 and advance payment of $68m for purchase of equipment. Wapda sent the plan to the ministry, which returned it to the authority to reassess the plan in view of current progress. The BoD of the project again took up the plan and incentivised accelerated construction. However, the contractor stated the plan was inconsistent with cash flow. The plan could not be materialised because the competent authority never approved the Best Efforts Plan,” it concludes.